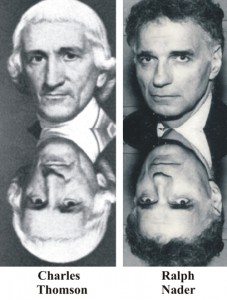 Revealed by: Spirit Guide or Spirit Being Ahtun Re Channeled through Kevin Ryerson

In the year 2001, I was researching a cohort that appeared to have reincarnated in contemporary times from the American Revolution. On my own, I had hypothesized past life matches for Bill Clinton, Al Gore and Geroge W. Bush, who were all involved in the 2000 Presidential election. Ralph Nader was a candidate for US President 2000 also and as people tend to reincarnate in groups, I suspected Nader likely was also involved in the American Revolution, though I had no clue as to who he may have been.

In a session with Kevin Ryerson, I asked Ahtun Re if Nader was incarnate during that period of time and if so, who he was. Ahtun Re confirmed that Nader was alive in the eighteenth century and that his name was Thomson or Thomason. Ahtun Re told me that he was a major player in the Continental Congress and Ahtun Re stated that I would find that Thomson had the same chiseled facial features as Ralph Nader.

Initially, I was frustrated in locating information on someone named Thomson in the books and other resources that I had collected on the American Revolution. Time was an issue, as I had signed a contract for by book, Return of the Revolutionaries, on October 30, 2001, which was John Adams’ birthday, and my publisher’s deadline for the book’s submission was fast approaching.

I decided to give the Nader case one last chance try by visiting the San Francisco Public Library. I went to the section on American history dealing with the Continental Congress and the Constitutional Convention, which featured three large bookcases of material. I systematically went through the index of each, hoping to find mention of a Thomson, or Thomason.

After going through a hundred books or so without success, my hopes began to dim. Suddenly, in a large black book, which most likely hadn’t been opened in years, I saw the name of Charles Thomson in the index, with a portrait also identified by a page number. Could this be what I was looking for? As I turned to the page with the portrait of Charles Thomson, I saw Ralph Nader’s face, with his distinctive eyebrows and the sharp vertical line on one side, symmetrically reflected in the face of Thomson.

In a subsequent session with Kevin Ryerson, Ahtun Re affirmed that Ralph Nader was Charles Thomson in the Revolutionary Era. In addition to having matching facial architecture, I found that the personality traits of Thomson and Nader were uncannily similar. Both were consumer advocates, both fought for the underdog and both were considered too radical to be elected to office themselves.

In Return of the Revolutionaries, I have dedicated an entire chapter on the Thomson | Nader reincarnation case, in which I compare quotes from Thomson’s and Nader’s writings, showing how their values and thoughts are essentially the same. This case had profound significance for me, for it demonstrated that Ahtun Re indeed appeared to have the capability of establishing past-life identities accurately.

Past Life Innate Talent: Nader has demonstrated the same talents and passions as Thomson in becoming an attorney, a consumer advocate, reformer and a political leader.

Relationships Renewed through Reincarnation: As described in Return of the Revolutionaries, in contemporary times Ralph Nader has been reunited with colleagues from the American Revolution who have reincarnated in political arena of the 2000 US presidential election.