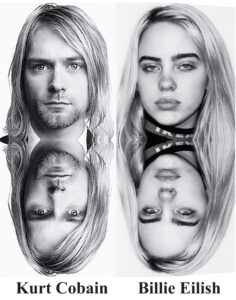 I was contacted by Katerina, who proposed that Billie Eilish is the reincarnation of Kurt Cobain, the songwriter and lead singer of the alternative rock group Nirvana.

I grew up on the music of Nirvana, but it never occurred to me that Billie is the reincarnation of Kurt. Katerina’s message to me made me seriously consider the possibility.

“Why I thought about the match of Billie and Kurt? Well, as a 90s child, I love Nirvana and I am very familiar with their music and with Kurt’s life and demise. Recently, something drove me to listen to some live recordings of Nirvana’s concerts and what struck me again and again was the emotion with which Kurt performed. The depth, the extent, the very humanity of it.

I believe that that’s why his music touched the hearts of so many people around the world. And then there is the fact of Nirvana’s music was not top 40 material. It is a deeply alternative music, and yet somehow it became so mainstream, that Kurt himself hated it.

My impression of Billie is that she is mostly troubled by her involvement in the music industry at such a young age. Luckily, it seems like she has a very good family that takes care of her. And I hope that this lifetime is very successful for her.

In reading your book, Origin of the Soul and the Purpose of Reincarnation, I think a lot about what your spirit guide, Ahtun Re, said that the point of us incarnating on Earth is to learn to perform an innate skill with joy (this is clearly why their soul keeps coming back), and lastly to love all of humanity (the last one is probably the hardest of all three, right?).

That was perhaps the first clue. Billie Eilish is exactly the same. She is making very alternative music, yet her fame is akin to a pop superstar. She is as likely to be loved by an angsty teen as was Kurt.

I watched a documentary about Billie Eilish on Apple TV and watching her perform, watching her emotion, I thought of Kurt Cobain immediately. As I was watching the documentary, I kept telling myself that there is no way she hasn’t done this before. I thought to myself that Billie has been on Earth and has done music before. She has connected with millions of people around the world. And something inside me replied: Kurt Cobain.

I hope from the depths of my heart that Billie does well in this lifetime. Nirvana members including Dave Grohl, went to see her in a concert and literally said that she reminds him of Nirvana.”

“The Time Dave Grohl Compared Billie Eilish To Kurt Cobain And She Responded, ‘Are You Kidding Me?’”

“If anyone were to list the legends of rock history and culture, one of the first names they would utter would be Nirvana. As you know, Nirvana was founded by singer-songwriter Kurt Cobain and bassist Krist Novoselic back in 1987. The band recruited Dave Grohl in 1990 and they soon started recording ‘Nevermind,’ which was Nirvana’s second album but the first to feature Grohl.

The album was a huge success and it reached Number 1 on the United States Billboard Charts. Nirvana came to be known as the band that ended the dominance of hair metal and they are credited for popularizing alternative rock. However, the band’s career spanned for only seven years as it ended with the passing of Kurt Cobain.

After Cobain’s passing, Dave Grohl founded Foo Fighters in 1994, and he’s currently the singer, guitarist, and primary songwriter of the band. As he has two daughters and is in the music business himself, he often gets the chance to listen to new musicians and offer his views, and one of the most controversial ones was considering Billie Eilish.”

What Did Dave Grohl Say About Billie Eilish and Her Relationship to Kurt Cobain?

“Back in 2019, Dave Grohl had angered some Nirvana fans when he compared Billie Eilish to Nirvana front man Kurt Cobain.

In an interview, Grohl had said that Eilish reminds him of Nirvana in the sense that she has an amazing connection with her audience, something that he’d only observed between Nirvana and their fans.

He apparently got a chance to listen to her music thanks to his daughters who are huge fans of Billie and going to her concert had really inspired him. During the interview, he’d also said that even though the instruments may not be, her music and vibe are authentic and rock and roll. She seems to have given him hope as he said that ‘rock n roll is not even close to being dead.”

What Dave Grohl said about Billie Eilish during the interview:

She totally connects to them. So we went to go see her perform at the Wiltern, and the connection that she has with her audience is the same thing that was happening with Nirvana in 1991. The people in the audience knew every word. And it was like our little secret. So I don’t know… and her music is hard to define! I don’t know what you call it! I try to describe her to people and I don’t know… I don’t even know what to call it. But it’s authentic. And I would call that rock n roll.

So… I don’t care what sort of instruments you use to do it. When I look at someone like Billie Eilish, I’m like… shit man… rock n roll is not even close to being dead…”

How Did Billie Eilish Respond To Dave Grohl?

“Upon hearing Dave Grohl’s praising words, Billie Eilish was so happy that she could barely contain herself. During an interview, they told her all the things that Dave had said about her and she said that it must be a joke because being compared to her idols is unbelievable. She said that she grew up listening to rock and that she is still a huge fan.

Then Eilish said that she had the chance to meet both Dave Grohl and his daughters and that they are all great. She also added that Dave is a very humble and sweet man and that his daughters are also amazing and seem to have taken their father’s genes. The young musician’s excitement upon hearing Grohl’s praising words warmed both her fans’ and rock fans’ hearts.”

Billie went on to add: “I feel like you hit your rock phase and then it doesn’t really go away. I’m still listening to My Chem, Green Day, Nirvana, and Foo Fighters.”

Comment from Walter Semkiw, MD Regarding Kurt Cobain as a Past Life of Billie Eilish

I have worked with Kevin Ryerson, the trance medium made famous by Shirley MacLaine, since 2001. Kevin channels a spirit being named Ahtun Re, who has demonstrated the ability to make past life matches with a high degree of accuracy.

In a session with Kevin, Ahtun Re affirmed that Billie Eilish is the reincarnation of Kurt Cobain.

Physical Resemblance in Reincarnation Cases: There is a similarity in the facial features of Kurt Cobain and Billie Eilish.

Relationships Renewed Through Reincarnation: Kurt Cobain, through the persona of Billie Eilish, has been reunited with his friend and bandmate, Dave Grohl.

Change of Gender in Reincarnation Cases: Kurt Cobain was a male, while Billie Eilish is female. Ian Stevenson, MD of the University Virginia, compiled over 1500 validated children’s past life memory cases. In this series of cases, gender only changed in ten percent of cases.

Gender change in reincarnation cases can lead to gender identity issues, including homosexuality. It does not seem that Billie has this kind of issue, though in the past she has worn asexual garb, followed by a very sexual female attire.

Suicide in Reincarnation Cases: Kurt Cobain commited suicide using a shotgun blast. In reincarnating as Billie Eilish, Kurt has another opportunity. Kurt had a very difficult childhood and as a teen, he was homeless. Fortunately, it appears that Billie has been born into a very loving family.