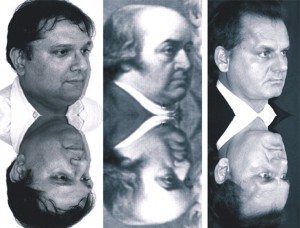 Through my work with Kevin Ryerson, Yuvraj Kapadia has been identified as my split, which means that Yuvraj and I derive from the same soul. Other terms for split incarnation include twin flames, twin souls or parallel lives. More can be learned about this phenomenon at: Split Incarnation

Reincarnation Research of Stevenson, MD at the University of Virginia Supports Split Incarnation

As it is an entertaining story, let me share how Yuvraj was identified as my split. In 2003, reincarnation cases involving Penny Peirce, which dramatically demonstrate the phenomenon of split incarnation, were published in my book, Return of the Revolutionaries. Later on, I learned that Ian Stevenson, MD of the University of Virginia also researched reincarnation cases that demonstrate split incarnation, though he used the term “cases with anomalous dates,” indicating that lifetimes overlapped in time.

As I studied this phenomenon, I wondered if perhaps I have a split. In a session with Kevin Ryerson, which occurred in 2004 or 2005, I asked Ahtun Re, the spirit guide channeled through Kevin, this question. I had started working with Kevin in 2001 and over time, Ahtun Re demonstrated to me the ability to make accurate past life or reincarnation identifications.

Ahtun Re said that I had a split in India who is involved in past life regression. At that time, I was planning to attend a World Congress for Regression Therapy, which was going to be held in New Delhi, India in 2006. I asked Ahtun Re if I would meet my split at this conference and he said that I would. When I received the program for the New Delhi event, I saw of photo of Yuvraj and based on a similarity in facial features, I wondered if he was my split.

In New Delhi, Yuvraj and Neeta attended my presentation and afterwards I sought them out. I explained to them my hypothesis that Yuvraj and I may be splits. They then surprised me with the following information.

They told me that they ran a center for past life regression and hypnosis in Mumbai and to learn as much as possible at the Congress, they intentionally went to different lectures given at the same time with the plan that they would share information afterwards. Yuvraj and Neeta made one exception. They decided to both attend my presentation as they had an intuition that they would be working with me in the future. They related that as they were listening to my presentation, which included a discussion on split incarnation, Neeta commented on how much Yuvraj and I resembled one another.

Split Incarnation, Parallel Lives, Twin Souls or Twin Flames: Parallel Paths on the Opposite Sides of the World

I learned that Yuvraj went to University of Mumbai, where he won the Gold Medal in microbiology, which was given to the top student. I too studied biology as an undergraduate and did well academically. Yuvraj later switched careers and dedicated his life to reincarnation and past life regression. Similarly, though I continued to practice medicine, my greatest passion is objective evidence of reincarnation and I did serve two terms on the board of directors of IARRT, a regression organization based in the United States. In sum, though born on opposite sides the planet, we have followed similar paths.

When I informed Yuvraj that I thought that he may be my split, he paused for a few seconds, looked at me and stated, “I know this is true.” Yuvraj explained that at that moment he had received inner, intuitive confirmation that he was my split. When I returned to the United States, in a subsequent session with Kevin Ryerson, Ahtun Re also affirmed that Yuvraj Kapadia is my split.

At the World Congress for Regression Therapy held in Turkey in 2011, in his presentation, Yuvraj cited and discussed the split incarnation case of Yuvraj Kapadia | Walter Semkiw.

In the image comparisons provided on this page, Yuvraj is featured on the left side, I am on the right and in the center, a proposed past incarnation we had during the time of the American Revolution is shown.

Another amusing story is that a few years later, I was at an IARRT board meeting in San Diego and I walked by a group photo of what I thought included me with a number of colleagues from India. As I walked away, I thought to myself, “I don’t remember taking that photo.” I turned around and examined the image more closely and realized that it was Yuvraj in photo, not me.

If this case of split incarnation is accepted, it shows how a soul can better accomplish chosen goals by incarnating into different places at the same time. Yuvraj and I are both promoting a better understanding of reincarnation in the two largest democracies in the world, India and the United States. Though the predominant religion in India, Hinduism, promotes the doctrine of reincarnation, past life regression has only been introduced to India approximately since the year 2000.

The late Sunny Satin, pictured to the right, who lived in Southern California, helped bring regression to India. Sunny founded the California institute of Hypnosis in New Delhi. It was Sunny who organized the World Congress for Regression Therapy in New Delhi and it was he who facilitated the publication of my book, Born Again, in India. Sunny and I appeared together on CNN-IBN in 2006.

Drs. Newton and Lakshmi Kondaveti, the Life Research Academy and Past Life Regression in India

Another couple that is invested in promoting past life regression in India is Dr. Newton Kondaveti and his wife, Dr. Lakshmi Kondaveti. Newton and Lakshmi are both trained as medical doctors, but they have dedicated their lives to past life regression and spiritual development. They have created the Life Research Academy (LRA) in Hyperabad, India.

Past life regression has the potential to heal the individual, while objective evidence of reincarnation, which demonstrates that a soul can change religion, nationality and ethnic affiliation from lifetime to lifetime, can bring societal healing to create a more peaceful world.

Yuvraj Kapadia and the EKAA Foundation

Yuvraj now operates the EKAA Foundation, which is dedicated to developing and promoting past life regression, hypnotherapy and spiritual growth.

Physical Resemblance in Split Incarnation Cases: Yuvraj and I have similar facial features.

Similar Talents and Interests: Yuvraj and I both did undergraduate work in biology and did well academically. We both later in life turned our energies to reincarnation research and past life regression.

Variation in Nationality and Ethnic Affiliation: My ethnic background is Ukrainian, though I was born in Chicago and am a US citizen, while Yuvraj is a native of India.

Split Incarnation: Yuvraj and I believe that we derive from the same soul.