From: European Cases of the Reincarnation Type, by Ian Stevenson

In a Past Life, Little Jenny Remembers Feeding her Grandma, the Lump and Little Dogs 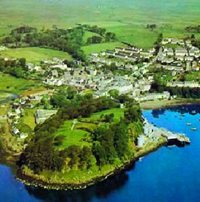 Jenny McLeod was born on November 7, 1949 in Aberdeen, Scotland. Her parents were Hamish and Margaret McLeod and the family soon settled in Tore, near Inverness.

Jenny was able to speak by the time she was one year old. When she was two, Jenny made statements about a previous lifetime. She was being fed by her grandmother, whose name was Mary Gordon. With her mother, Margaret, sitting nearby, Jenny said to her grandmother:

Let us let Ian Stevenson, MD, describe what happened next:

“Apparently, by association, Jenny then mentioned a hill called The Lump at Portree. She spoke about a house there, which had a little pier of its own. She referred to some steps which provided a shorter way of reaching the house by going over the hill, rather than using the road that went around the The Lump. She talked about ‘nice little dogs’ that she had had. (The McLeods had no dogs of their own, large or small.}” (2)

Her mother, Margaret, related that Jenny then became sleepy, as she had just finished her lunch. Due to her drowsiness, Jenny stopped talking and she never spoke about this past lifetime again.

Validation of Jenny’s Past Life Memories

The McLeods told their minister, Reverend H.M.S Muir, about Jenny’s statements, who wrote a summary of the case. The summary was sent to a colleague of Ian Stevenson in Edinburgh, who forwarded the summary to Stevenson. 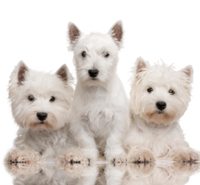 In 1967, Stevenson traveled to Tore, Scotland, to research the case himself. Stevenson interviewed family members and he confirmed that Jenny did not learn details of this proposed past lifetime through normal means.

Bessie was born in 1865 in Portree of the Isle of Skye, where she lived her entire life. She lived near the sea and indeed, she had a house with a pier, which was the only pier in the area. Her house was also next to a hill called The Lump, which is pictured above.

There were steps or stepping-stones on this hill, which provided a shortcut to reaching the nearby town of Seafield. This shortcut could be used instead of walking around the Lump.

Of interest, Bessie raised West Highland Terriers. Recall that Jenny made a statement about the “nice little dogs” that she had. 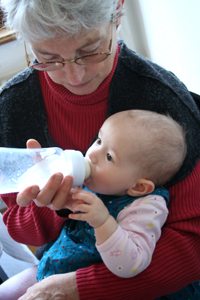 Bessie had nine children, one of whom was Mary Gordon, who was Margaret’s mother and Jenny’s grandmother. Recall that it was Mary Gordon who was feeding Jenny when she made her past life statements.

Bessie was very fond of her granddaughter Margaret, Jenny’s mother. As such, it appears that Bessie, from the spirit world, made arrangements to reincarnate and be born to one of her favorite granddaughters, Margaret McLeod.

Physical Resemblance: Margaret, Jenny’s mother, thought that Jenny resembled her grandmother, Bessie, in build or overall physique. Margaret noted that Bessie and Jenny’s builds were very unique relative to other family members. There was no mention of whether a facial resemblance existed. Of course, the resemblance in build could be due to genetic factors, as this represents a case of same family reincarnation.

Innate Talent: Margaret noted that Jenny was similar to Bessie “in their ways of speaking and her manner of going about things.” (3)

In addition, Jenny and Bessie both enjoyed home-made soup and highland dancing, though Margaret admitted that her other daughters had these traits also.

More significantly, Jenny and Bessie were unique from other family members in that they both loved to read and they both had good singing voices. As such, it appears that a talent for singing was brought across from one incarnation to another.

Soul Planning & Same Family Reincarnation: As noted, Bessie appears to have planned her reincarnation so that she would be born to one of her favorite granddaughters, Jenny McLeod.