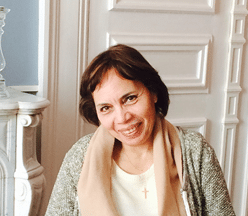 Simone Aubin lives in Normandy (France). She taught French to foreigners living in France or abroad. She is a graduate of the University of Rouen and of the Franco-British Chamber of Commerce and Industry. She is the author of various books, some have been published, some others are about to. Always interested in spiritual subjects, in general, and in reincarnation, in particular, her writings are always full of spirituality. The first book on reincarnation she read was entitled Nos vies antérieures, the book written by Joan Grant and Denys Kesley, she read it in two hours in the train Paris /Le Havre and everything she read seemed to her quite normal, it was in 1979, since her interest in this subject is now part of her most intimate convictions.

She writes articles on personal development and spirituality for different magazines Psychologie-Réussir, Cerveau Science & Conscience, Science & NDE. For her articles she used to interview a lot of different people (mediums, psychiatrists, psychologists, physicians etc.) coming from different countries. She interviewed Barbro Karlen with whom she had a long interview published in the French magazine Science & NDE (2013), now entitled Science & Au-delà. Her last book, Confession d’un moine, mentions the death and its after in an abbey. Nevertheless, the book for which she seeks an American Publisher takes place in the United States in the 80’s and is entirely dedicated to reincarnation. At present she is writing an article on Dr. Walter Semkiw about his previous life as John Adams, as well as his work on reincarnation. You can have an overview of Simone’s writings on her website : www.writer7650.wix.com/scriptore