Shai Tubali-Advisor on Kundalini, the Chakras and Expansion of Consiousness 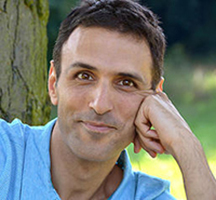 Shai Tubali is an international speaker, author and spiritual teacher. He is considered by many as one of Europe’s leading experts and innovators in the field of the chakras and the subtle energy system. Currently based in Berlin, he tours Europe extensively and guides seminars and retreats in Germany, Switzerland, Austria, the Netherlands, Croatia, Spain and Greece.

Formerly the head of the Berlin holistic center Chiro-Yoga, he has now established a new international center called Human Greatness, which promotes a holistic way of life in light of the chakras, as well as many therapeutic and meditative methods he has developed. His dream is to turn this knowledge of integral life into a fundamental part of education in mainstream schools.

As a prolific author since 1996, Shai has published 23 books in English, German and Hebrew, involving spiritual nonfiction, prose, poetry and soon – academic research. Several of his books have appeared in additional languages including Chinese, Taiwanese and Korean; some have become bestsellers and two have won book awards.

Shai is also an enthusiastic postgraduate researcher at the University of Leeds in the UK, working towards a PhD in the field of the philosophy of mysticism. In addition, he has experimented with filmmaking, writing and directing the 2018 short film After the Future, which has been presented at dozens of festivals and has won four prizes. After the Future is now represented by a US distributor.