Denise Railla attended a presentation in Los Angeles that I did with Hans Christian King in 2005, who the Miami Herald has named as one of the top 5 psychics in the United States. Hans has worked with Yale-trained psychiatrist Brian Weiss, MD, the best-selling author of Many Lives, Many Masters, who Oprah Winfrey has promoted. Has has been identified as the reincarnation of Nostradamus, a past life match Hans supports. To learn more, go to the: Reincarnation Case of Nostradamus Hans Christian King

After the presentation, Denise approached me and told me that she would like to introduce me to the jazz legend Herbie Hancock. Denise and Herbie, well as Herbie’s wife, Gigi, are Buddhists who chant together. Denise thought Herbie would be interested in reincarnation research. Denise Railla is the photographer and visual artist who created our logo, Passages through Lifetimes, which is featured to the right.  Denise died too soon at the age of 57. Her art, though will live on through the ReincarnationResearch.com website.

Herbie Hancock, a Child Prodigy Pianist, as the Reincarnation of Amadeus Mozart 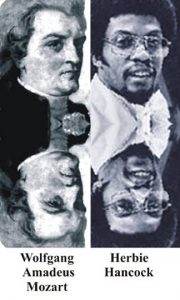 As the opportunity of meeting of Herbie Hancock had arisen, I wanted to research a past life for Mr. Hancock. I read that Herbie was a child prodigy pianist, born in Chicago, Illinois, my own home town. My father, though a physician by profession, was also a gifted pianist. My childhood is marked with evening memories of hearing my father, Zenobius, a Ukrainian immigrant, play Chopin downstairs on the piano as I went to sleep.  As a medical student, I purchased student tickets for the Chicago Symphony and my father would go to their concerts on frigid Chicago Wednesday evenings.

Herbie’s parents were Wayman Hancock, a meat inspector, and Winne Hancock, a secretary. As such, he was not born into a musical family, so Herbie’s talent cannot be explained by genetics or family coaching.

I learned that at the age of 11, Herbie was selected to be a piano soloist who played piano with the Chicago Symphony Orchestra. He performed the first movement of Mozart’s Piano Concerto No. 26 in D Major, K 583 (Coronation). Later, when I met Herbie, he shared that originally, he was supposed to play a different Mozart piano piece with the Chicago Symphony, but with only two weeks’ notice, he was informed that the program had been changed and that Herbie had to learn Mozart’s Piano Concerto No. 26. Herbie shared that this was an extraordinary demand on an 11 year old, but he did it, successfully.

When I met Herbie in 2006, he told me that though he was a child prodigy pianist who could play the music of many composers, he had a special understanding and talent for playing Mozart’s piano music. Reincarnation research has revealed that souls replicate talent and abilities from past lifetimes, as demonstrated in the Paul Gauguin | Peter Teekamp reincarnation case.

I also learned that Herbie is best friends with Wayne Shorter, a world famous saxophonist. Wayne and Herbie were musicians in the quartet lead 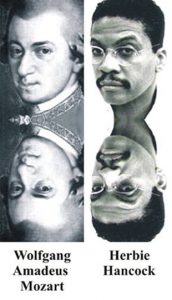 by Miles Davis. Wayne has served as a a mentor to Herbie Hancock.

Before I met Herbie, based on my reading of his biography on the Internet and learning that he was a child prodigy pianist who at 11 years of age played a Mozart composition with the Chicago Symphony, I wondered if Herbie has a past life connection with Amadeus Mozart.

Wayne Shorter as the Reincarnation of Leopold Mozart, the Father and Teacher of Wolfgang Amadeus Mozart

Kevin Ryerson is the trance medium who is featured in four of Shirley MacLaine’s books. Kevin channels a spirit guide named Ahtun Re, who has demonstrated to me the ability to make past life matches with a high degree of accuracy. I have worked with Kevin and Ahtun Re since 2001 and have had sessions with them on a monthly basis. 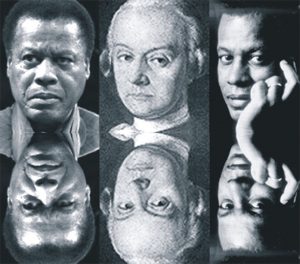 Shortly thereafter, I contacted Denise to tell her of these proposed past life matches that were confirmed by Ahtun Re. I was pleasantly surprised when Denise enthusiastically shared that Herbie Hancock’s nickname for Wayne Shorter has been “Mozart,” which I was not aware of when I made the hypotheses that Herbie and Wayne are the reincarnations of Amadeus and Leopold Mozart. As such, these cases can be seen as a form of affinity cases, in which people are attracted to their own past lifetimes or have an intuitive connection to specific past lifetimes. Other affinity cases include:

A Past Life for Michael Jackson

When I met Herbie and Gigi Hancock, they both impressed me as very down-to-earth, nice and stable people. This seemed inconsistent with the way Amadeus Mozart was portrayed in the movie Amadeus. In a session with Kevin Ryerson, I asked Ahtun Re about this inconsistency. I was told that Mozart’s eccentricities were greatly exaggerated. Ahtun Re did say that Amadeus Mozart did experience anxiety over the need to find patrons to support him financially. This insecurity could have led to Amadeus demonstrating anxiety, which may have led to this misconception regarding his personality.

Physical Resemblance in Reincarnation Cases: Resemblances are observed in the facial features of Wolfgang Amadeus Mozart and Herbie Hancock, as well as between Leopold Mozart and Wayne Shorter.

Innate Past Life Talent: The musical talent of Leopold Mozart and Wolfgang Amadeus Mozart are reflected in the careers of Wayne Shorter and Amadeus Mozart.

Gigi Hancock, the wife of Herbie Hancock, was also a relative of Leopold and Wolfgang Amadeus Mozart.

Change in Race, Religion, Nationality and Ethnic Affiliation: Leopold and Wolfgang Amadeus Mozart were German Caucasians, while both Wayne Shorter and Herbie Hancock are African Americans. The Mozarts were born into a Christian family, while Herbie Hancock is a practicing Buddhist. Knowledge that souls can change race, religion and nationality can help create a more peaceful world, as most conflicts are based on differences in these cultural markers of identity. An important case in this regard is the: