Reincarnation Cases of Annie Adams Fields | Abby Wambach and Sarah Orne Jewett | Glennon Doyle: A Lesbian Couple Reincarnates Together as a Lesbian Couple Again, Demonstrating the Planning of Lifetime and the Persistance of Writing Talent Across Lifetimes. 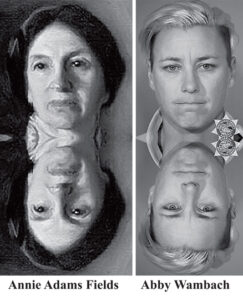 Upon their First Meeting, Glennon Doyle and Abby Wambach have Instant Recognition of an Emotional Connection

I was watching a television show that featured author Glennon Doyle and soccer star Abby Wambach, who is also a best-selling author. Glennon and Abby are a lesbian couple, though Glennon was previously married to a man, with whom she had children.

In the interview, the couple was asked how they met. Glennon related that she was at a book publicity event at the Palmer House in Chicago. She was in a small backstage room seated at a table with other authors waiting to for the program to begin.

Abby, who was also participating in the event, opened the door to the room. Glennon stared at Abby and was struck by her exotic appearance. Glennon related that she unconsciously stood up and stretched her arms towards Abby, as if her body moved on its own in recognition of Abby.

At the same Glennon heard within herself: “There She Is.” It seemed to Glennon that she had been waiting for Abby all her life.

Abby and Glennon walked together to the stage and when doing so, Glennon touched Abby’s arm. Abby related that Glennon’s touch felt like a lightning bolt of recognition. They went on to become a married lesbian couple. 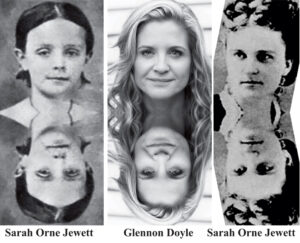 When I saw this story on TV, I had a lightning bolt of recognition that Glennon and Abby were a couple in past lifetimes, as this would explain their mutual reactions upon meeting.

In a session with trance medium Kevin Ryerson, I explained the situation to Ahtun Re, the spirit guide channeled through Kevin who has demonstrated the ability to make past life matches with a high degree of accuracy. I asked Ahtun Re to identify past lives for Glennon and Abby in which they were a couple.

As is his custom, Ahtun Re said, “One Moment.” A period of silence followed, during which Ahtun Re went into a meditative state to search for this information. After a minute or two, Ahtun Re returned and told me very specifically:

“They were lesbian couple named Annie Adams Fields and Sarah Jewett, who were both female writers in 19th century.”

I had never heard of either woman, but upon doing a little research, I found that they did exist, were American authors and a lesbian couple.

I realized that this was a phenomenal set of past life matches. Please keep in mind that I do not inform Kevin before our sessions what my inquiries will be, so he has no chance to do research beforehand. I am always amazed at Ahtun Re’s ability to derive past lives.

Physical Resemblance in Reincarnation Cases: The facial features of Annie Adams Fields and Abby Wahbach are similar, just as there is a similarity in appearance between Sarah Orne Jewett and Glennon Doyle.

When comparing photos of Sarah and Glennon posed at a 45 degree angle to the camera, at almost a profile view, the resemblance is extraordinary.

Past Life Passions, Talent and Abilities: Writing talent is conveyed from one lifetime to another in these two sets of reincarnation cases.

Abby Wambach is a soccer star, though Annie Adams Fields is not known for her athletic ability. It may be that Annie may have had that inclination, but in the 19th century, women were not encouraged or allowed to play competitive sports.

Planning of Lifetimes and Renewal of Relationships through Reincarnation: A lesbian couple reincarnated together, demonstrating that souls plan lifetimes and even influence the process of conception, to be with ones they have loved and been with before. To learn more, please go to: