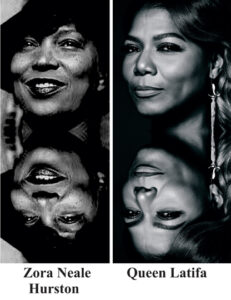 Zora Neale Hurston was an African-America born in 1891 in Alabama. She was an author and filmmaker who portrayed the struggles, involving slavery and segregation, that black people faced in the United States. Zora died in 1960.

Queen Latifah, whose birth name is Dana Owens, was born in 1970 in New Jersey. She is a singer, actress and music producer, whose work revolves around the African-America experience in the United States. She won two NAACP Awards for her contributions to African-American culture.

In a session with Kevin Ryerson, Ahtun Re, the spirit guide channeled through Kevin who has demonstrated the ability to make past life matches with a high degree of accuracy, affirmed that Queen Latifah is the reincarnation of Zora Neale Hurston.

Physical Resemblance in Reincarnation Cases: There is a striking resemblance between Zora Hurston and Queen Latifah. Click on the image comparison to enlarge it.

Past Life Talent, Abilities and Passion: Both Zora Hurston and Queen Latifah have demonstrated great intelligence and creativity in portraying the lives and  struggles, including injustice and prejudice, that African-Americans have faced.