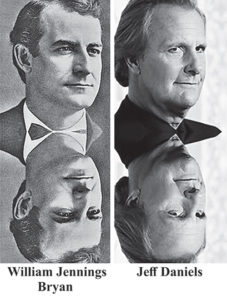 Over the years I’ve enjoyed the varied performances of Jeff Daniels, from his portrayal of Joshua Lawrence Chamberlain in the movie Gettysburg, his roles in the movies Dumb and Dumber and  Escanaba in Da Moonlight, as well as in the television series, The Newsroom.  Between his performances and interviews I was often given the sense that “in another life, he’d make a fine politician.” This sense of Daniels the politician was certainly underlined by his performance in The Newsroom, especially in the opening segment of this show, which has had over 8 million views on YouTube: The Newsroom: Opening Scene

While going through some books and websites on the politics of the Gilded Age, I came across a photo of a younger William Jennings Bryan and immediately recognized the soul of Jeff Daniels. With these two seemingly different lifetimes, the soul is expressing different facets of an archetype common to both politicians and actors.

While not particularly successful at getting elected to high office, Bryan was a renowned, energetic, show-stopping orator who sought to improve the lives of farmers and laborers against the increasing power of the railroads and the large business trusts of the day, while championing bimetallism. He later took up the anti-imperialist cause, resigning as US Secretary of State in protest, supported prohibition and famously opposed Darwinism in the Scopes Trial.  In 1896, as the youngest candidate for President in US history, Bryan crisscrossed the country giving 500 stump speeches in an era when Presidential candidates typically stayed home. Whatever cause he championed, he did so with the energy and flair of a gifted performer.

Physical Resemblance in Reincarnation Cases:  Jeff Daniels and William Jennings Bryan bear a remarkable resemblance to each other. While similar appearance is often coincidental or superficial, there are many strong cases in which it comes into play.  There are a variety of explanations for this, many of which describe some kind of etheric body imprinting mechanism. My own psychic process, and those of many other intuitives, frequently involves the perception of subtle underlying geometries and patterns that give rise to the physical form, that often operate throughout multiple incarnations.

Past Life Talent: Possessing the instinctual knack of shining and thriving in the spotlight is a valuable skill for an actor, politician or anyone who leads a very visible life on the world stage. Perhaps for better or worse, there is much overlap in the requisite tools for these professions!

Note from Walter Semkiw, MD: We have additional reincarnation cases in which actors and television personalities have embarked on political careers. These include: