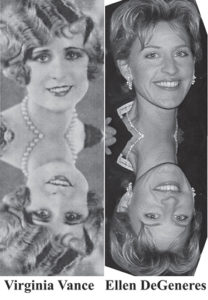 How Derived: Revealed by Spirit Being Ahtun Re in a Ryerson-Semkiw Reincarnation Research Session

Ellen DeGeneres has always struck me as being a very open-minded person, which made me think that she may be open to reincarnation research. As such, in a session with Kevin Ryerson, who channels a spirit being named Ahtun Re, who has demonstrated the ability to make past life matches with a high degree of accuracy, I asked Ahtun Re for an identifiable past lifetime for her.

Ahtun Re related that Ellen was a silent movie actress who was associated with the comedy actor and producer Fatty Arbuckle.

I passed this information to a collaborator, Ishtar Ishaya, who volunteered to research this case. Shortly afterwards, Ishtar suggested that Ellen may have been Virginia Vance. Sure enough, Virginia Vance was an actress in the Fatty Arbuckle production of My Stars.

In a subsequent session with Kevin, Ahtun Re affirmed that Ellen DeGeneres is the reincarnation of Vance.

Of interest, on the day that I am writing this article, it has been reported that actor Ashton Kutcher and his business partner donated 4 million dollars to The Ellen DeGeneres Wildlife Fund.

A few years ago, I did a presentation on evidence of reincarnation for Ashton Kutcher and Demi Moore, when they were still together, at their home in Beverly Hills. Through my work with Kevin Ryerson, I tried to derive past lives for Ashton and Demi. Ahtun Re told me that they were actors and a couple in the New York City theater scene at the turn of the century (1900). Unfortunately, I was not able to find these past life identities. If anyone has knowledge of this theater era, your help would be appreciated. I can be contacted at: walter@reincarnationresearch.com

A Past Life for Oprah Winfrey 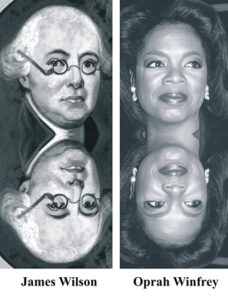 Oprah Winfrey is a neighbor of Ellen DeGeneres in the community of Montecito, near Santa Barbara, California. A past life for Oprah is included in my book, Born Again, in which Oprah is identified as the reincarnation of James Wilson, a signer of the Declaration of Independence.

Wilson also taught English literature at the College of Philadelphia, which is consistent with Oprah’s love of books and her famous book club. Wilson also became one of the wealthiest individuals in the new nation of the United States, much like Oprah has created great wealth. Wilson eventually became a lawyer, taught law at the College of Philadelphia and was appointed to the Supreme Court of the United States by George Washington.

A Past Lifetime for Gayle King

Oprah has had a very close relationship with Gayle King since 1976. Gayle had a career as a reporter and television news anchor before she became an editor for O, The Oprah Magazine in 1999. Gayle currently is a co-anchor of CBS This Morning, which I watch every day. I am fond of Gayle’s bubbly and insightful personality.

In my analysis, Oprah and Gayle have become the closest of friends because they were husband and wife during the American Revolution. Through my work with Kevin Ryerson, Gayle has been identified as the second wife of James Wilson, whose maiden name was Hannah Gray. Like Gayle King, Hannah functioned as a reporter in writing a book, A More Obedient Wife: A Novel of the Early Supreme Court.

If Gayle read this book by Hannah, it would be interesting to see if she perceives any continuity of thought or writing style. In the reincarnation case of John B. Gordon | Jeffrey Keene, an analysis of letters written by Gordon and Keene performed by a linguistics professor at the University of California, Berkeley showed a common writing style. To learn more, please go to: 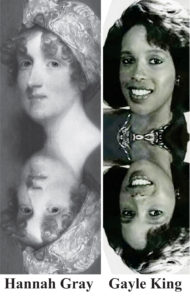 Physical Resemblance in Reincarnation Cases: There are similarities in facial architecture in the reincarnation cases involving Ellen DeGeneres, Oprah Winfrey and Gayle King. Click on the images to enlarge them to better study facial features.

Past Life Talent: Virginia Vance was a comedic actress and Ellen DeGeneres has had her own television situation-comedy series entitled Ellen. The parallels between James Wilson | Oprah Winfrey and Hannah Gray | Gayle King were described above.

Relationships Renewed through Reincarnation: James Wilson and Hannah Gray Wilson have been reunited in the Best Female Friends of Oprah Winfrey and Gayle King.

Gender Change through Reincarnation: James Wilson was a male, who reincarnated as Oprah, a female.

Change of Race: James Wilson and Hannah Gray Wilson were Caucasian, while Oprah Winfrey and Gayle King are African-American. Reincarnation research, including cases published by Ian Stevenson, MD of the University of Virginia, show that souls can change religion, nationality, ethnicity and race from one lifetime to another. This observation and understanding can help make the world a more peaceful place, as most wars and conflicts are based on differences in these cultural markers of identity.