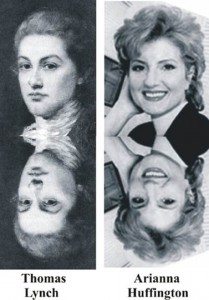 Affirmed by: Spirit Guide or Spirit Being Ahtun Re in a Ryerson-Semkiw Reincarnation Research Session, 2004

In a session with Kevin Ryerson, Arianna Huffington, founder of the Huffington Post, was affirmed by Ahtun Re to have been Thomas Lynch, Jr., a signer of the Declaration of Independence of the United States.

Around 2005 or so, I had the opportunity to meet Ms. Huffington when she did a public presentation in San Francisco. After her talk, I introduced myself, briefly described the work that I was doing in reincarnation and with Kevin Ryerson, told her that we believed that she is the reincarnation of Lynch and I showed her the image match provided to the right.

Ms. Huffington seemed interested and asked if she could keep the image comparison. I happily gave her the graphic.

Earlier in her career, Ms. Huffington wrote a biography of Pablo Picasso. As such, she would find the reincarnation case of Pablo Picasso | Alexandra Nechita of interest.

Other individuals reincarnated from the time of the American Revolution include George W. Bush, Bill Clinton, Al Gore and Tommy Franks, whose cases are found in my book Born Again

Physical Resemblance from One Lifetime to Another: There is a resemblance observed between Thomas Lynch, Jr. and Arianna Huffington. Place your cursor on an image to enlarge it and your arrow key to scroll up and down on the enlarged image.

Past Life Talent: Arianna Huffington demonstrated natural leadership skills in college by becoming the President of the Cambridge Union Society, a debating organization at Cambridge University. She became an influential political spokesperson in the United Stated and eventually ran for Governor of California. As noted, she is the founder of the Huffington Post.