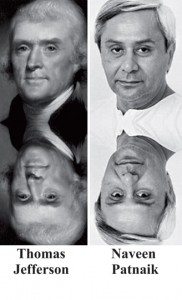 In a session with Kevin Ryerson, I asked Ahtun Re, the spirit guide channelled through Kevin who has demonstrated an ability to make accurate past life matches, about a contemporary incarnation of Thomas Jefferson. Ahtun Re told me that Jefferson has reincarnated as a prominent politician in India in that country’s upper house of Parliament, the Rajya Sabha, who has been considered as a candidate for the position of Prime Minister.

After some research, Ahtun Re affirmed that Jefferson has reincarnated as Naveen Patnaik. In addition to a physical resemblance, there are similarities in personality. Enlarge the image by placing your cursor on it.

Thomas Jefferson had been a friend to John Adams and served in the cabinet of George Washington. Adams and Washington were leaders of the Federalist Party, which supported a strong central government. Along with his friend James Madison, Jefferson secretly formed an opposition party and subsequently resigned from Washington”s cabinet. He would run against John Adams, who was Washington’s Vice President, after Washington announced he would not seek a third term as President of the United States. Jefferson lost the election to John Adams, who became the second President of the US.

In a similar way, Naveen Patnaik created a new political party in India, the Biju Janata Dal (BJD). He too has been concerned about corruption in political parties, much like Jefferson was concerned that the Federalists, including Adams and Washington, were creating a new monarchy. For his part in rooting out corruption, including within his own party, Patnaik has earned the name “Mr. Clean.”

Another similarity is the pattern of breaking away from former allies, specifically the members of another Indian political party, the Bharatiya Janata Party (BJP). The following quote is from Wikipedia:

“BJD had an alliance with BJP in Odisha and it also supported the NDA in the centre since 1998 till 2009 when Mr Naveen Patnaik decided to break the alliance and go alone in the 2009 general elections.The decision was however referred by BJP as the betrayal of Naveen Patnaik.” (1)

In these examples, there is a pattern of breaking away from former allies with a residual sense of betrayal.

Physical Resemblance in Reincarnation Cases: There is a similarity observed in the facial bone structure of Thomas Jefferson and Naveen Patnaik. It is my opinion that physical appearance is determined by the interplay of the soul’s energy template and genetic inheritance, which can result in some variation of appearance from one incarnation to another.

Past Life Talent: Both Jefferson and Patnaik have demonstrated skills at politics and have attained great popularity.

Change in Nationality and Ethnic Affiliation: Jefferson was born in the American British colony of Virginia and was a Christian. Naveen Patnaik was born in India and is of the Hindu faith.