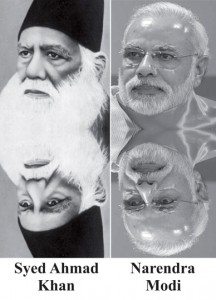 Revealed by: Ahtun Re in a Ryerson-Semkiw Reincarnation Research Session, April 2014

An Indian supporter of ReincarnationResearch.com asked me who the new Prime Minister of India, Narenda Modi, may have been in a past incarnation. In a session with Kevin Ryerson, I posed this question to Ahtun Re, the spirit guide channeled though Kevin who has demonstrated an ability to make accurate past life matches.

Ahtun Re told me Narenda Modi was a prominent Muslim Indian politian who was one of the first to proposed that an autonomous Muslim state be created, which eventually led to the creation of Pakistan.

After some research, Ahtun Re affirmed that Narenda Modi is the reincarnation of Syed Ahmad Khan. Enlarge the image by placing your cursor on it.

Past Life Talent: Both Khan and Modi can be characterized as successful and influential political activists.

Change in Religion: Syed Ahmad Khan was Muslim, while Narenda Modi is of the Hindu faith. Knowledge that souls can change religion, ethnic affiliation and nationality from one lifetime to another can help create a more peaceful world, as most conflicts are based on differences in these cultural markers of identity.