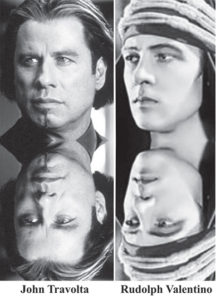 The first time that I saw the proposed reincarnation match between John Travolta and Rudolph Valentino was around the year 2000, as it was posted on the website of friend of mine, Joseph Myers. Joe passed away in 2012. Joe had derived his own past life as Edward Bellamy and he realized that facial features can remain the same from one lifetime to another. As such, his story is similar to my own. Joe’s reincarnation case is featured in my first book, Return of the Revolutionaries

I started to work with trance medium Kevin Ryerson in 2001 and found that a spirit guide that he channels named Ahtun Re can make past life identifications with a high degree of accuracy. Subsequently, I reviewed cases that Joe had posted on his website with Ahtun Re, who agreed with about 60% of the matches that Joe had intuitively derived or posted from other sources and he disagreed with about 40% of cases posted on the site. With his own book and his website, Joe has made significant contributions to understanding how reincarnation works and he always joked that I was continuing his work.

One case that Ahtun Re agreed with is that Rudolph Valentino has reincarnated as John Travolta.

Of interest, Rudolph Valentino was very interested in spiritual phenomena and the spirit of Valentino played a major role in the development Leslie Flint, the most famous direct voice medium in history.

John Travolta is also spiritual and he has pursued his development though Scientology. To learn more of Leslie Flint and the involvement of Valentino | Travolta in Flint’s story, please go to:

Physical Resemblance from One Lifetime to Another: The facial features of Valentino and Travolta are consistent.

Innate Past Life Talent: A movie Romeo of the past has reincarnated in contemporary times.

Change of Nationality from One Incarnation to Another: Rudolph Valentino was born in Italy, while John Travolta is a native of New Jersey.