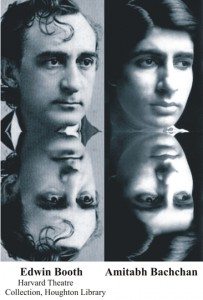 Revealed by: Spirit Guide or Spirit Being Ahtun Re in a Ryerson-Semkiw Reincarnation Research Sessions, 2003, 2005

After I made the assessment that Ahtun Re, a spirit guide that Kevin Ryerson channels, can make accurate reincarnation matches, I started asking about the past lives of accomplished individuals.  When I asked Ahtun Re for a past lifetime for Steven Spielberg, I was surprised when he told me that Spielberg was Abraham Lincoln’s only son to grow to adulthood, Robert Todd Lincoln. I never would have made that connection, though Lincoln was a great theater fan, which appears to have extended to his sons.

About two years later, I was working on reincarnation cases for an Indian version of Born Again, including that of Amitabh Bachchan, one of India’s most prominent movie stars. Ahtun Re told me that Bachchan in a past lifetime was Edwin Booth, one of the most prominent actors of 19th century America and the brother of John Wilkes Booth, the man who assassinated Abraham Lincoln.

Further investigation revealed that Edwin Booth’s entire family has reincarnated around Amitabh Bachchan in India, while the Lincoln family, including Abrahan and Robert Todd Lincoln | Steven Spielberg, have reincarnated in modern day Hollywood.

The specific identities of members of these two linked soul groups, the Lincoln soul group and the Booth soul group, provide fascinating examples of how relationships are renewed by reincarnation. These cases are featured in Born Again.

Physical Resemblance from One Lifetime to Another: There the facial features of Robert Todd Lincoln and Steven Spielberg are similar, including matching beards. One difference is that Robert Todd was heavier than Steven is. An uncanny resemblance exists between Edwin Booth and Amitabh Bachchan.

Renewal of Relationships through Reincarnation: The Lincoln family has reincarnated in Hollywood and the relationship of Robert Todd Lincoln with his father, Abraham, has been renewed. The case of Abraham Lincoln is featured in Born Again. The family of Edwin Booth has reincarnated in Bollywood, the movie center of India.