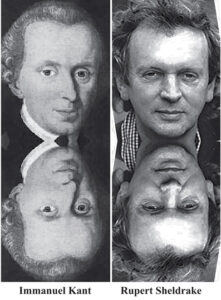 My Australian friend and colleague, psychologist Terry Oleson, PhD, proposed that English biologist and parapsychologist Rupert Sheldrake, PhD may be the reincarnation of the German philosopher Immanuel Kant.

That past life match never occurred to me, but upon reading about the two and comparing facial features, It seemed to me to be an accurate reincarnation match.

Subsequently, on August 2, 2019, I had a session with world-famous trance medium Kevin Ryerson, who channels a spirit guide or spirit being named Ahtun Re. I have worked with Kevin regularly since 2001 and Ahtun Re has demonstrated to me the ability to make past life matches with a high degree of accuracy.

Ahtun Re affirmed that Rupert Sheldrake is the reincarnation of Immanuel Kant.

Kant was born on April 22, 1714. His primary thesis was that the mind shapes experience and reality. He also forwarded that intuition can provide accurate information independent of objective observation or reason. Kant’s idea of intuition is consistent with telepathy.

Rupert Sheldrake was born in England on June 28, 1942, about 140 years after Kant died. Sheldrake is a philosopher and a scientist, with an inclination towards parapsychology, which is the study of mental phenomena that cannot be explained by orthodox science.

Intuition is a major research subject of parapsychologists. Recall that intuition was a major interest of Immanuel Kant.

Sheldrake’s primary thesis is that memory is inherit in nature, which creates a collective memory, one that all living creatures can tap into. This collective memory can explain telepathic downloads of information, a process that can explain intuition. Recall that Kant also proposed that information can be downloaded by the mind outside of direct observation.

Note that both Kant’s and Sheldrake’s writings focus heavily on intuition and telepathy.

An Amusing Case of Telepathy with a Squirrel

Physical Resemblance in Reincarnation Cases: The facial features of Immanuel Kant and Ruprecht Sheldrake are similar. In particular, they have large, round foreheads.

Past Life Talents and Interests: The works of Kant and Sheldrake are consistent.

Change of Nationality and Ethnicity: Kant was German while Sheldrake is English. Understanding that nationality, religion, race and ethnic affiliation can change from one lifetime to another can help create a more peaceful world.