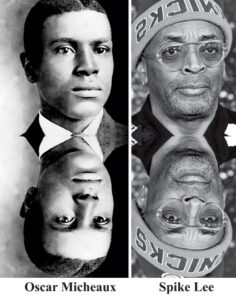 Micheaux: The Son of a Slave Becomes a Motion Picture Producer

Oscar Micheaux was born in 1887 in Illinois, the son of a slave who was likely  owned by French immigrants. He is considered the first major African American filmmaker. Micheaux made silent movies and then transitioned to sound films, directing and producing 44 movies in all.

The focus of his work was racial issues between blacks and whites, covering the topics of racial injustice, lynching, mob violence and economic inequality.

Of interest, Micheaux, early in life moved to South Dakota, where he bought land and worked as a farmer. He wrote a novel, The Homesteader, which was in part based on his experiences in South Dakota. Homesteaders were people who were given free plots of land in the American West in an effort to develop the region.

Spike Lee was born in Atlanta, Georgia in 1957. Like Micheaux, Lee’s movies center around race relations, including the issues of poverty, urban crime and the politics of race.

In a very interesting parallel, Spike Lee named his production company 40 Acres and a Mule Filmworks, which appears to be an unconscious reference to his own past life as Micheaux, who bought land in South Dakota and became a farmer prior to embarking on his career as a filmmaker.

To view other cases involving the theatre arts, please go to:

Physical Resemblance in Reincarnation Cases: There is a similarity of facial features between Oscar and Spike.

Past Life Passions, Talent and Abilities: Spike Lee is continuing the work of Oscar Micheaux in making movies centered on racial injustice.