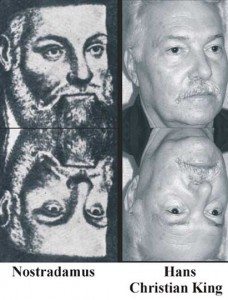 “Earthshaking fire from the world’s center
Will cause tremors around the New City.”
“The sky will burn at 45 degrees
Fire approaches the Great New City
Immediately a huge scattered flame leaps up.”

These lines were written by Nostradamus in 1555. When the New York World Trade Center was attacked on September 11, 2001, many interpreted the event as the fulfillment of this prophecy made by Nostradamus almost 500 years ago. What made the prediction seem to fit, in an uncanny way, was the fact that the second suicide plane struck the second tower with wings tilted at a 45 degree angle. Due to this prediction, new interest arose in Nostradamus. I will now assert that Nostradamus reincarnated as veteran professional psychic Hans Christian King. Click on images to enlarge them.

I met Hans Christian King on December 7, 2003, when I attended a program entitled Three Mediums, which featured Hans, Maria Shaw and Carla Baron. I introduced myself to these three mediums and asked if I could try to derive past lives for them, utilizing Ahtun Re, the spirit guide channeled through Kevin Ryerson, who had demonstrated an ability to make accurate past life matches.

Hans greeted me in a warm manner. When I extended my hand to shake his, he grasped my hand with both of his. He struck me as a very loving soul. When I asked if I could ask Ahtun Re for past lifetime for him, that could be identified historically, he said, “yes.”

When I inquired about a past incarnation for Hans, Ahtun Re refused to reveal one. I protested, stating that Hans had given me permission, so why wouldn’t Ahtun Re give me a past life identity. Ahtun Re replied, “We will tell Mr. King directly.” He added, “It is an interesting one, though.”

I tried to arrange a session for Hans with Kevin Ryerson, as we were all scheduled to be in Las Vegas over the same weekend in January 2004. Unfortunately, logistics for a session didn’t work out, though we all managed to have dinner together on a Saturday night. I sat Hans and Kevin together, so that they could talk. I overheard Hans pose the following question to Kevin: “Why won’t Ahtun Re give Walter a past lifetime for me?” Kevin replied, “It usually means that Spirit wants to tell you something important directly.”

Walter has the Intuition that Hans is the Reincarnation of Nostradamus

The evening and weekend ended uneventfully. A week or two later, I was pondering the situation. I kept asking myself, “Why won’t Ahtun Re give me a past lifetime for Hans?” It struck me as unusual that Hans used a three word name, Hans Christian King. I knew that when people reincarnate, they often choose to use versions of their names that have the same cadence from previous lifetimes. A good example featured in my book, Return of the Revolutionaries, is the case of Barbara Marx Hubbard, who in the American Revolutionary era is identified as Mercy Otis Warren. Not only did these women choose to use three word names in two lifetimes, but they also share the traits of being intellectual writers in both incarnations.

Though I wasn’t consciously thinking of the correlation of names at the time, I pondered the case of Hans Christian King and who he might have been in a past lifetime. I silently repeated the name, “Hans Christian King,” in my mind and suddenly, the name “Nostradame” popped into my awareness. I realized that Michel de Nostredame, the real name of Nostradamus, had a similar cadence as Hans Christian King.

Past Life Resemblance: Hans has the Same Facial Features as Nostradamus

I quickly checked the Internet for a portrait of Nostradamus and found that there was only one historically accurate image of the prophet, which was done by his son, Cesar Nostradame, and that Hans’s face matched the face of Nostradamus precisely. In a subsequent session with Kevin Ryerson, Ahtun Re confirmed that Hans Christian King is the reincarnation of Nostradamus.

When I received this confirmation, I telephoned Aaron Hunt, Hans’s personal assistant, to tell him of the news. Aaron was pleasantly shocked. I asked Aaron to tell Hans of the match. When Aaron telephoned Hans to inform him of his past life identity, guess what program Hans was watching on television? Hans was watching a program on Nostradamus.

Hans has made a living by giving psychic readings since he was about 20 years of age. He has been named one of the top five psychics in America by the Miami Herald, and Hans has been endorsed by Yale trained psychiatrist Brian Weiss, MD, author of Many Lives, Many Masters.

After he was informed of his past life match with Nostradamus, Hans asked his spirit guides if this was true, that he is the reincarnation of Nostradamus. Hans’s guides told him that this is true and not to let this go to his head.

Later, when I asked Hans if I could disclose his past life identity as Nostradamus publicly, Hans gave me permission to do so. When I reflected, “People could ridicule you for this,” Hans simply replied, “Truth is truth.”

Objective evidence of reincarnation demonstrates that people have the same personality characteristics, and often time the same gifts, from lifetime to lifetime. When I was in Las Vegas in January 2004, prior to the time when I came up with the hypothesis that Hans was Nostradamus, I had a session with Hans. Interestingly, the session was all about my future. I later ordered CDs that Hans produced, which featured sample sessions which he had with various clients. In all these sessions, Hans is observed forecasting the future for his clients.

There is a difference in the public image of Nostradamus, though, and persona of Hans Christian King. Nostradamus, due to his prophecies, is known as the “Prophet of Doom.” One the other hand, I perceive Hans as a “Prophet of Light and Love.” It is my contention that Nostradamus, who was trained as a medical doctor, a man who risked his life treating victims of the Black Plague in France, was misunderstood. Nostradamus was as much of a humanitarian as is Hans Christian King. His written work, Les Propheties, which established him as the “Prophet of Doom,” simply overshadowed the man, Michel de Nostradame. 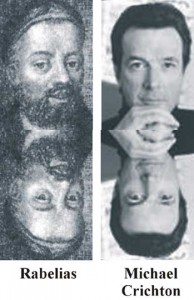 The Hans Christian King | Nostradamus case led to an interesting secondary case. Nostradamus went to medical school with a man named Francois Rabelais, who became a close friend to Nostradamus. Though trained as a doctor, Rabelais became one of the best known writers in French history. Rabelais also wrote about the future and published Pantagrueline Prognostication in 1533, which was a parody of astrological almanacs that predicted the future. He is known for writing a fantastic epic about two giants, Gargantua and Pantagruel.

This match was subsequently confirmed by Ahtun Re. Jurassic Park involves giant dinosaurs that are brought back to life. As such, the characteristic of writing fantasy epics about giants is observed in the lives of Rabelais and Crichton.

I had the pleasure of meeting of Michael Crichton at one of his book signings. There, I gave him a copy of my book, Return of the Revolutionaries. When Crichton learned of my work in reincarnation, he asked, “Are you the one who has posted on the Internet that I am the reincarnation of Rabelias?” I replied, “Yes.” 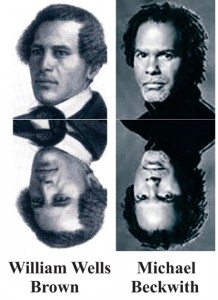 Hans Christian King died on January 16, 2019. In the latter stages of his career, Hans became a frequent guest speaker at the Agape International Spiritual Center in Culver City, California, which is led by Reverend Michael Bernard Beckwith. Of interest, as past life for Reverend Beckwith has also been derived. He was a 19th century African-American abolitionist.

Reverend Beckwith was kind enough to hand deliver a packet containing my early reincarnation work to President Bill Clinton when Beckwith visited the White House, while Clinton was still in office.  To learn more, please go to:

Physical Resemblance in Reincarnation Cases: There is a striking resemblance between Nostradamus and Hans Christian King. The facial features of Rabelais and Michael Crichton correspond, as do those of William Wells Brown and Reverend Michael Bernard Beckwith.

Innate Past Life Talent: Psychic abilities are observed in the lives of Nostradamus and Hans King. Rabelais and Michael Crichton were both medical doctors, as well as very successful fiction writers, who both even wrote books involving giants. Rabelais wrote about Gargantua and Pantagruel, while in Jurassic Park, Crichton wrote about giant dinosaurs who come back to life through the use of recovered dinosaur DNA. The biochemical reaction which makes the rebirth of dinosaurs theoretically possible is Polymerase Chain Reaction, which was invented by Nobel Laureate, Kary Mullis.

Of interest, Dr. Mullis and his wife Nancy both agreed to be featured in my book Born Again as the reincarnations of Benjamin and Julia Rush.

Change in Nationality and Ethnic Affiliation: Nostradamus and Rabelais were French, while Hans Christian King and Michael Crichton were born in the United States.