Reincarnation Case of Mandeep Kaur | Pushpa: Change of Religion in a Past Life Case

From: Can the Mind Survive Beyond Death? Vol. 1 Reincarnation Research, by Satwant K. Pasricha

The Death of Mandeep Kaur, a Sikh 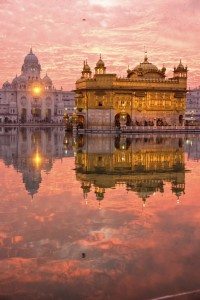 Mandeep Kaur lived in New Delhi, India, with her husband, who made a living repairing bicycles. Mandeep had younger sisters. Mandeep’s family was uneducated, relatively poor and they belonged to the Sikh religion. A famous place of worship for Sikhs is the Harmandir Sahib, popularly known as the Golden Temple, which is pictured to the right.

About 4 years later, a girl named Pushpa was born on June 16, 1965 in New Delhi, approximately 350 meters or 380 yards from where Mandeep lived. Pushpa’s family was of the Hindu religion.

When she was 18 months old, Pushpa stated pointing in the direction of where Mandeep and her husband lived. Later on, Pushpa said she was married to a Sikh and she recited the names of her children in a past incarnation. When her family asked what her past life husband did for a living, Pushpa made movements with her legs as if she was pedaling a bicycle.

When she was between 2 to 3 years of age, Pushpa demonstrated a severe fear of knives. She also had knowledge of Sikh religious practices, which was unusual for a young Hindu girl.

Eventually, Pushpa told her family that in her past life, her name was Mandeep Kaur and that her husband stabbed her to death. Pushpa expressed deep concern for her children from her past incarnation and she wanted to visit her past life family.

The family decided to investigate Pushpa’s claims, making inquiries regarding a Sikh woman who was stabbed to death. They found that Pushpa’s story matched the life of Mandeep Kuar, whose husband was a bicycle repairman.

Pushpa Accurately Identifies Members of her Past Life Family 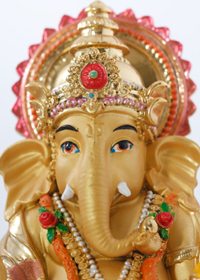 Pushpa’s family contacted the Kaur family and arranged a meeting, where Pushpa accurately named members of her past life family. When Pushpa met Mandeep’s sisters, who were now older than she, Pushpa treated them as if they were still younger, as if their chronological status was still unchanged.

When Pushpa met Mandeep’s husband and murderer, she demonstrated “coolness and indifference.” (1)

Mandeep’s and Pushpa’s families denied any prior knowledge, acquaintance or interaction with one another. Dr. Pashricha pointed out that though only 350 meters separated their homes, socially they lived in different worlds. Pushpa’s family was well-educated, with members of her family including a medical doctor, a Sanskrit scholar, a journalist and a schoolteacher. In addition, they were Hindu and quite prosperous. In contrast, Mandeep’s family was poor, uneducated and Sikh.

Pushpa Attends the Wedding of her Past Life Daughter

Pushpa maintained a relationship with Mandeep’s family and participated in the wedding of Mandeep’s third daughter.

Dr. Pasricha interviewed Pushpa four times between 1973 and 1975, as well as 17 other informants involved in this case. Dr. Pashricha also reviewed Mandeep’s autopsy report. Her conclusion is that this is a valid reincarnation case. (2)

Change in Religion: Mandeep was a Sikh, whereas Pushpa was born into the Hindu religion. Pushpa had innate knowledge of Sikh religious practices, even though she was born into a Hindu family.

Past Life Phobia: As a child, Pushpa had a marked fear of knives, reflecting her past life in which she was stabbed to death.