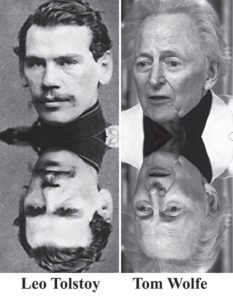 Leo Tolstoy was born in the Tula region of Russia in 1828 and died in 1910. He is considered one of the world’s greatest novelists, who wrote realistic fiction that portrayed society as it was.

Tom Wolfe was born in 1931 in Richmond, Virginia and has become a best-selling author, who also has written novels that portray society realistically.

Of interest, Tom Wolfe is an admirer and friend of former US President George W. Bush, who has been identified as the reincarnation of the American Revolutionary war hero, Daniel Morgan. The Morgan | Bush case is featured in my books, Return of the Revolutionaries and Born Again.

Physical Resemblance from One Lifetime to Another: Leo Tolstoy and Tom Wolfe have roughly similar facial features. Click on the image to enlarge it.

Innate Past Life Talent: Tom Wolfe has replicated the talent of Tolstoy.