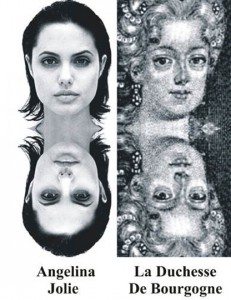 When I asked for a past lifetime for Angelina Jolie, Ahtun Re told me that she was a member of the French Court of Louis XIV. I procured a book pertaining to this era and read about a woman who seemed to be a possible match for Angelina.

Past Life Behavior: Care for the Poor

What caught my attention was that this member of aristocracy, La Duchesse De Bourgogne, had a very tender heart for the underprivileged, which was demonstrated by her taking 40 poor families under her wing. This is consistent with Ms. Jolie’s interest in social causes. In a subsequent session with Kevin Ryerson, Ahtun Re confirmed that Angelina Jolie was La Duchesse De Bourgogne in a past incarnation. 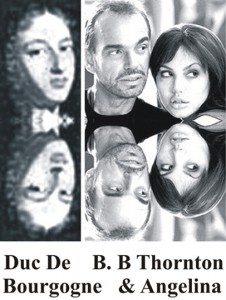 A past lifetime for Brad Pitt was also identified in that era. He was a French military lieutenant who had a romance with the Duchesse. Unfortunately, I have not been able to identify this individual in French history.

The Duchesse, though, married another member of the aristocracy, Duc de Bourgogne, who in contemporary times reincarnated as Angelina’s former husband, Billy Bob Thornton.

Physical Resemblance from One Lifetime to Another: There is a resemblance between Angelina Jolie and La Duchesse De Bourgogne, though the Duchesse was not considered quite as beautiful as Angelina, as in this past lifetime she had crooked teeth and walked with a limp, as one leg was shorter than the other. A resemblance is also noted between Duc de Bourgogne and Billy Bob Thornton.

Change of Nationality and Ethnic Affiliation from One Incarnation to Another: Angelina Jolie, Brad Pitt and Billy Bob Thornton were French in these prior incarnations and American in contemporary times.

Renewal of Relationships through Reincarnation: These three individuals who lived in the time of Lous XIV have reincarnated together in contemporary Hollywood.