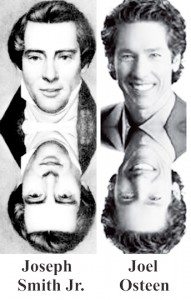 Proposed by: A ReincarnationResearch.com Supporter (2014)

An supporter wrote to me inquiring whether Joseph Smith, Jr., founder of the Latter Days Saints and Mormon religions may have reincarnated as the very successful televangelist Joel Osteen. This proposed match made immediate sense, as Joseph Smith and Joel Osteen can both be characterized as charismatic spiritual leaders who have made a vast impact on society. I also noticed that there is an uncanny physical resemblance between Smith and Osteen. Place your cursor on the image comparison to enlarge it.

In a session with Kevin Ryerson, Ahtun Re, the spirit being or spirit guide who has demonstrated the ability to make accurate past life matches, affirmed that Joel Osteen is the reincarnation of Joseph Smith.

Another reincarnation case involving Mormonism is that of: Almon Babbit | Mitt Romney

Physical Resemblance in Reincarnation Cases: There is a strong physical resemblance between Joseph Smith and Joel Osteen. In some images of Smith, his face is almost triangular in shape with a prominent brow tapering to a pointed chin. Joel Osteen has similar facial architecture, but one would need a photo of Osteen taken when he is not smiling to appreciate the similarity, but in almost all photos of Osteen, he has a broad smile.

Past Life Talent: Both Joseph Smith and Joel Osteen have shown talent as charismatic spiritual leaders who have created large followings. Joseph Smith produced the Book of Mormon, while Joel Osteen is a best selling author of a number of spiritual books. 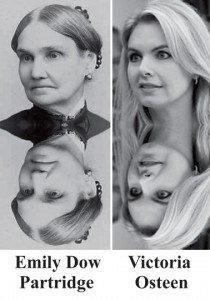 Change in Religious Affiliation: Though Smith and Osteen both can be characterized as Christians, Joel Osteen is a Protestant minister while Joseph Smith founded the different and unique Latter Day Saints movement, of which Mormonism is the largest branch. Protestant beliefs are quite different from those of Mormons and as such, these can be considered different religions.

Relationships Renewed through Reincarnation: Victoria Osteen, the wife of Joel, has been affirmed by Ahtun Re to have been Emily Dow Partridge in a past incarnation. Though I understand that there is controversy regarding whether Joseph Smith had multiple wifes, Emily has been traditionally been identified as one of the Smith’s spouses. There is a physical resemblance between Victoria and Emily.