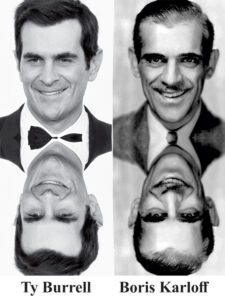 Ty Burrell as the Reincarnation of Frankenstein, that is, the Actor Boris Karloff

A fan of ReincarnartionResearch.com wrote to me and proposed that Ty Burrell, an American actor and a star of the comedy show, Modern Family, is the reincarnation of the nineteen-century actor Boris Karloff. In reviewing images of these two actors, I observed a remarkable similarity in facial features. Click on images to enlarge them to appreciate the resemblance in facial architecture or bone structure.

Karloff became famous for his role in movies about the fictional character Frankenstein. Karloff’s large forehead established the template for physical images of Frankenstein for movies of the future.

Boris Karloff was awarded two stars on the Hollywood Walk of Fame for his accomplishments in cinema. Boris Karloff died on February 2, 1969.

Ty Burrell was born on August 22, 1967, about year and a half before Boris Karloff died. As such, this is a case of split incarnation, in which a soul expresses itself in two physical incarnations at the same time. Ian Stevenson MD, of the University of Virginia called these “cases with anomalous dates,” as lifetimes overlapped in time.

Though Ty Burrell is best known as a comedic actor, he has also done serious portrayals on Broadway and he has also performed voice roles in many animated films, just as Karloff did the voice of the Grinch.

In a session with Kevin Ryerson, Ahtun Re, a spirit being  channeled through Kevin who has demonstrated the ability to make past life matches with a high degree of accuracy, affirmed that Ty Burrell is the reincarnation of Boris Karloff.

Physical Resemblance in Reincarnation Cases: There is an uncanny resemblance between Boris Karloff and Ty Burrell.

Past Life Talent, Behavior and Abilities: The acting talent of Boris Karloff shines forth in the career of Ty Burrell.

Change in Nationality: Boris Karloff was born in England, while Ty Burrell was born in the United States. Understanding that souls can incarnate into different religions, ethnic affiliations and nationalities from one lifetime to another can help create a more peaceful world, as most conflicts and wars are based on differences in these cultural markers of identity.

Split Incarnation or Parallel Lives: Ty Burrell was born on August 22, 1967. Boris Karloff died on February 2, 1969. As such, the soul of Karloff | Burrell animated two physical bodies at the same time for about a year and a half.

Reincarnation research shows that souls can inhabit more than one human body at a time. Ian Stevenson, MD of the University of Virginia, who studied children with spontaneous past life memories that were objectively validated, documented a number of split incarnation cases, though he termed these “cases with anomalous dates,” as lifetimes overlapped in time.