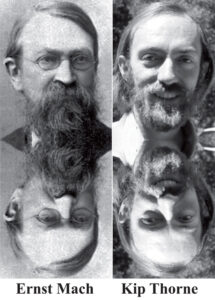 US Navy UFO Videos featured on the TV Series “Unidentified”

After the US Navy validated UFO videos taken by fighter jet pilots, I took an interest in the subject. My first article on ETs and UFOs can be reviewed on the following page:

I am not a physicist, I am a medical doctor, so I do not have the educational background to understand the physics aspect of interstellar travel.

Still, I gave it a try. Some have speculated that interstellar travel can somehow be facilitated by black holes.

One physicist who is prominent in the field of black holes is Kip Thorne.

I have been working on reincarnation research since 1995. This research shows that we have similar talents and abilities from one lifetime to another, and that facial features can be consistent. These principles of reincarnation are also demonstrated in the work of Ian Stevenson, MD of the University of Virginia.

Kip Thorne as the Reincarnation of Physicist Ernst Mach

I assumed that Kip Thorne must have been an accomplished physicist in a past lifetime. As I rolled this idea in my mind, I thought of Ernst Mach, who I then found had similar facial features to Kip.

In a session with Kevin Ryerson, the spirit being named Ahtun Re, who has demonstrated the ability to make past life matches with a high degree of accuracy, affirmed that Kip Thorne is the reincarnation of Ernst Mach.

Mach was born in 1838 in Austria. He was an influential physicist who foreshadowed Einstein’s theory of relativity.

Kip Thorne was born in 1940 in the United States. He is an expert on astrophysical implications of Einstein’s theories, including our understanding of black holes, gravitation waves and interstellar travel. Thorne was a consultant to the movie Interstellar.

Physical Resemblance in Reincarnation Cases: The facial features of Ernst Mach and Kip Thorne are similar.

Past Life Passions, Talent and Abilities: Kip Thorne is continuing the work of Ernst Mach.

Change of Nationality: Mach was born in Austria, while Thorne was born in the United States.

Understanding that we can change religion and nationality from one lifetime to another can help create a more peaceful world, as most conflicts and wars are based on differences in these cultural markers of identity.

An important case in this regard is: