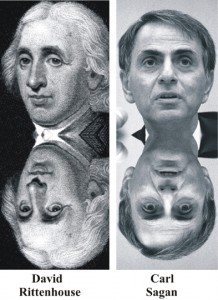 Case Solved by: Spirit Guide or Spirit Being Ahtun Re in a Ryerson-Semkiw Session

“There are three claims in the [parapsychology] field which, in my opinion, deserve serious study,” the third of which was “that young children sometimes report details of a previous life, which upon checking turn out to be accurate and which they could not have known about in any other way than reincarnation.” Carl Sagan-1996

I was introduced to David Rittenhouse while researching the reincarnation case of Charles Thomson | Ralph Nader. Thomson was an American Revolutionary in Philadelphia who was associated with Thomas Paine. Paine lived in Philadelphia when he wrote his pamphlet, Common Sense, which with straightforward arguments explained why independence from Britain was desirable. The pamphlet became a best seller that helped influence people’s emotions and positions, and helped launch the Revolutionary War.

By that time, I had observed that souls tend to express themselves in similar ways, from lifetime to lifetime, and that they tended to demonstrate similar talents. It made no sense to me that Rittenhouse, who I perceived to be a little known Philadelphia political revolutionary, would reincarnate as a world-famous astronomer. I was afraid that Ahtun Re was wrong and I became discouraged about his being a reliable resource in making reincarnation matches. In fact, my heart sank because I felt that I was at another dead-end in my work with psychics. But I was the one who was wrong.

When I researched David Rittenhouse more thoroughly, I found that he was an instrument maker who built the first telescope in America. I also found that he was a mathematician who, based on his telescope observations, built an orrery–a precursor to the planetarium, which portrayed the solar system with great accuracy. I still, though, could not find a portrait of Rittenhouse.

Keep in mind that my in the fall of 2001, search engines such as Google where not available. One had to research the old-fashioned way, through books and in libraries.

When I went to visit Ian Stevenson in 2001, I also made a point to visit tourist destinations in Virginia, including the homes of Thomas Jefferson and James Madison. Madison had collected portraits of individuals involved in the American Revolution, including a portrait of Rittenhouse. It was then, at the end of 2001, when I saw the portrait of Rittenhouse in the home of James Madison that I realized that it was the face of Carl Sagan.

This all occurred early in my work with Kevin Ryerson and when I realized that Ahtun Re had made this match, which to me now seemed to be uncannily accurate, I realized that something very big was happening; that I had a resource that could accurately identify souls in past and contemporary incarnations.

Past Life Talent and Passions: Rittenhouse and Sagan were both leaders in the field of astronomy. In addition, both were politically active as Rittenhouse supported the American Revolution and Sagan became active in protesting the Vietnam War and in lobbying against nuclear arms proliferation.