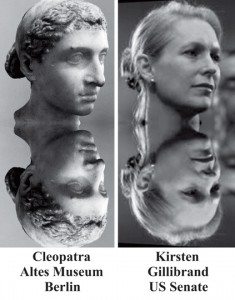 The Search for the Reincarnation of Cleopatra

Ever since I started to work with Kevin Ryerson in 2001, and after I made the assessment that a spirit guide that he channels, whose name is Ahtun Re, has the ability to make accurate past life matches, I’ve wondered if Cleopatra has reincarnated in contemporary times.

Over the years, I have asked this question of Ahtun Re repeatedly, but he has always declined to reveal the current identity of Cleopatra. This changed in late October 2013, when he told me that Cleopatra is an up and coming female politician in New York State, who is a fiscal conservative, but progressive on social issues.

The Reincarnation of Cleopatra Revealed 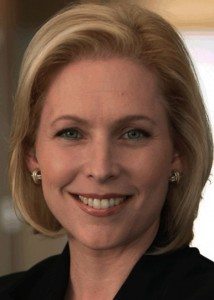 As legend has it that Cleopatra was a great beauty, I asked if this politician is similarly gifted. Ahtun Re said that the contemporary Cleopatra is an attractive woman, but her intelligence is her primary asset.

After researching young politicians in New York State, Kirsten Gillibrand appeared to be the likely candidate. In a subsequent session with Kevin, Ahtun Re affirmed that Gillibrand is the reincarnation of Cleopatra.

Parallels Between Cleopatra and Kirsten Gillibrand

When I asked what parallels exists between Cleopatra and Kirsten Gillibrand, Ahtun Re related that the image of Cleopatra as a seductress has been exaggerated and that her intelligence has been underestimated. Cleopatra became romantically involved with Julius Cesar and Mark Antony for political reasons, just as the royalty of Europe often engaged in arranged marriages for political reasons. The marriage of Louis XVI and Marie Antoinette is an example of an arranged marriage that was created for political alliances.

Ahtun Re stated that Cleopatra became involved with Julius Cesar and Mark Antony for similar reasons and specifically in so that Egypt would remain an independent country and not become a Roman vassal state.

In contemporary times, he believes that Gillibrand will promote New York as a socially progressive state that is fiscally responsible, which can serve as a model for the other states of the Union.

By the way, I believe that Ahtun Re refused to tell me the contemporary identity of Cleopatra in 2001 as he thought it would be prudent to allow Ms. Gillibrand to rise to a level of prominence before this very famous past incarnation was revealed and imposed on her.

Principles of Reincarnation and Understanding Past Lives

Physical Resemblance in Reincarnation Cases: Cleopatra has a reputation of being a beautiful woman and Kirsten Gillibrand is also attractive. In fact, one Internet search category she is found under is “Hottest Senator.” Of course, Cleopatra likely had a darker complexion, but bone structure remains consistent, if judged by the comparison of sculpture of Cleopatra’s face and the image of Senator Gillibrand provided above.

Past Life Talent: Cleopatra was the last political ruler, or Pharaoh, of Ancient Egypt. Kirsten Gillibrand is a US Senator representing the State of New York.

Change in Religion, Nationality, Ethnic Affiliation: Cleopatra was Egyptian and followed Egyptian spiritual beliefs, whereas Kirsten Gillibrand was born in Albany, New York and is Catholic.