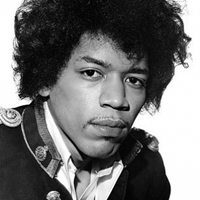 Affirmed by: Spirit Guide or Spirit Being Re in a Ryerson-Semkiw Reincarnation Research Session

The eternal quality of the music of Jimi Hendrix as always amazed me, especially given his short life of only 27 years. If ever there was an individual who expressed past life talent, it was Jimi. Two ReincarnationResearch.com supporters forwarded proposed past lives for Hendrix, which were subsequently affirmed by Ahtun Re, a spirit being channeled through Kevin Ryerson who has demonstrated the ability to make accurate past life matches.

Chevalier de Saint George as a Past Life of Jimi Hendrix 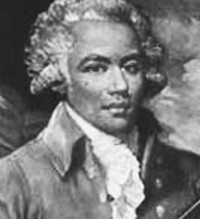 Chevalier de Saint George was born on December 25, 1745 and died on June 10, 1799. He was a native of Guadeloupe, a Caribbean island, the son of a white plantation owner and his wife, a former slave. Chavalier showed skill as a violinist early on and his father took him to Paris in 1749 for further training. There, his skill as a musician and composer eventually led to his selection for appointment as the director of the Royal Opera of Louis XVI. Unfortunately, this appointment was blocked by three opera divas who refused to be directed by a mulatto. Still, his accomplishments led him to be known as the “Black Mozart” and he was the first European classical composer of African heritage.

Becoming a master of classical violin appears to be a natural training ground for skill at the electric guitar. Another case in which a virtuoso violinist reincarnated to become an electric guitar legend involves the case of: Francesco Geminiani | Jimmy Page

The physical resemblance between Chevalier de Saint George, pictured above, and Jimi Hendrix is quite extraordinary.

Charlie Christian as a Past Life of Jimi Hendrix 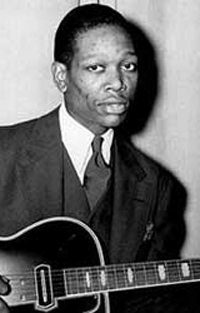 Duane Issacson, a ReincarnationResearch.com supporter and a musician himself, submitted the hypothesis that Jimi Hendrix is the reincarnation of Charlie Christian, a jazz guitarist who made the guitar evolve from a strumming, rhythm instrument to a solo instrument in which notes are struck individually. This new use of the guitar was pioneered by Christian and perfected by Hendrix. Charlie Christian was born on July 29, 1916 and died on March 2, 1942 of tuberculosis. Jimi Hendrix was born on November 27, 1942, only 8 months after Christian died.

The physical resemblance between Christian and Hendrix is seen in their wide spread eyes, though the similarity in appearance is not as great as between Chavalier de Saint-George and Jimi.

In a sessions with Kevin Ryerson, Ahtun Re confirmed that Charlie Christian reincarnated as Jimi Hendrix and that in a prior incarnation, he was Chavalier de Saint-George.

Physical Resemblance from One Lifetime to Another: As noted, there are resemblances noted between Chavalier de Saint-George, Charlie Christian and Jimi Hendrix.

Innate Past Life Talent: Jimi Hendrix was a prodigy guitarist in his short lifetime, drawing on the talent and experience of his past life personas, Chavalier de Saint George and Charlie Christian. As noted in the reincarnation case of Francesco Geminiani | Jimmy Page, training to become a virtuoso classical violinist in one lifetime can lead to becoming a virtuoso electric guitarist in another.

Change of Nationality: Chavalier St. George was of French ancestry while Charlie Christian and Jimi Hendrix were born in the United states.

Split Incarnation: Charlie Christian died on March 2, 1943, while Jimi Hendrix was born only 8 months later on November 27, 1942. If it is assumed that the soul is involved in the development of the fetus, then for a period of about a month, the soul of Christian | Hendrix animated Charlie Christian and Jimi Hendrix, who was in the womb, at the same time.

Race Issue: It is interesting that the soul of Hendrix appears to have chosen to be born with African ancestry in three lifetimes. Recall that Chavalier de Saint George suffered discrimination as a mulatto, which was inflicted by Caucasian French opera divas. It may be that the soul of Hendrix chose to incarnate in subsequent lifetimes with African heritage to demonstrate that musical genius can be expressed through a persecuted race.