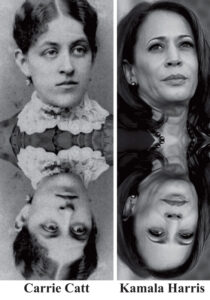 When Kamala Harris entered the national stage by becoming the first woman, as well as the first person of color, to become Vice President of the United States, it was natural to wonder who she may have been in a past lifetime.

I have worked with trance medium Kevin Ryerson since 2001. I found that Kevin channels a spirit guide named Ahtun Re who has demonstrated the ability to make past life matches with a high degree of accuracy.

In a session with Kevin, I asked Ahtun Re who Kamala may have been in a past lifetime. After a period of contemplation, Ahtun told me that Kamala Harris was a nineteenth century American suffragette who was committed to establishing the right of women to vote. He told me that the her name was along the lines of “Carrie.”

After doing a little bit of research on the Internet, I found a likely candidate. Carrie Chapman Catt was born in 1859 and died in 1947. She was a suffragette leader who fought for the 19th Amendment, which gave women in the United States the right to vote in 1920.

A related case is: A Past Life for Joseph Biden

Physical Resemblance in Reincarnation Cases: These is similarity of the facial architecture of Carrie Chapman Catt and Kamala Harris.

Past Life Passions, Talent and Abilities: The passion for the advancement of society is witnessed in the lives of Carrie and Kamala.

Change of Race in Reincarnation Cases: Carrie Chapman Catt was Caucasian, while Kamala Harris was born to a mother from India and a father of African ancestry.

The observation that people can change race and ethnicity from one lifetime to another can help create a more peaceful world, as most wars and conflicts are based on differences in these cultural markers of identity.