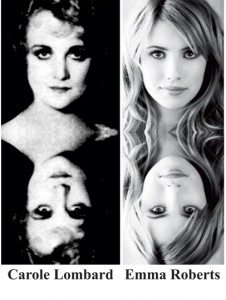 Proposed by: A Psychic in Michigan

An ReincarnationResearch.com supporter related to me that the actress Emma Roberts, who is the daughter of actor Eric Roberts and niece of Julia Roberts, believes that she is the reincarnation of the silent movie star, Carole Lombard, based on information given to her by a psychic who lives in Michigan. This story is summarized at the following link:

In a session with Kevin Ryerson, I asked Ahtun Re whether this is true and he confirmed that Carol Lombard has reincarnated as Emma Roberts.

Of interest, Carole Lombard was friends with Madalynne Fields, who was associated with the famous slapstick movie producer, Mack Sennett. Sennett has replicated his slapstick comedy success in contemporary times as the producer of America’s Funniest Home Videos.  Mack Sennett reincarnated as producer Vin Di Bona.

Carole Lombard was also friends with Jack Benny, who is also incarnate in contemporary times. Jack Benny has reincarnated as Kelsey Grammer.

Physical Resemblance from One Lifetime to Another: A physical resemblance is noted between Carole Lombard and Emma Roberts.

Innate Past Life Talent: The acting talent of Carole Lombard is expressed in the career of Emma Roberts.

Change of Religion, Nationality or Ethnic Affiliation from One Incarnation to Another: Carole Lombard was of German and English descent, while Emma Roberts is part Native American.