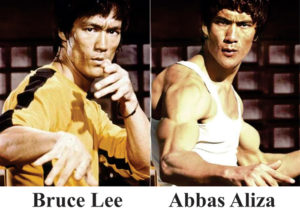 Supporters of ReincarnationResearch.com informed me of a man in Afghanistan who bears a striking resemblance to the late martial arts star Bruce Lee. This man, Abbas Alizada, became enamored with Bruce Lee movies when he was 15 years old and went on to master the martial arts Bruce Lee popularized. Abbas has gained recognition and popularity in Afghanistan and has became known as the “Bruce Lee of Afghanistan.”

Just because a person resembles a person from the past does not mean that the look alikes represent a reincarnation case. Still, reincarnation research does reveal that facial features often remain similar from one lifetime to another.

I have worked with trance medium Kevin Ryerson on a monthly basis since 2001 and I found that a spirit being he channels named Ahtun Re has the ability to make past life matches with a high degree of accuracy.

Nesrin Meral, one of the individuals who proposed this past life match, has written an article on this reincarnation case. Her article can be accessed through the link provided below:

Physical Resemblance: There is a striking resemblance between Bruce Lee and Abbas Alizada. The image comparison provided is from dawn.com. Click on the image to enlarge it.

Change of Nationality and Religion: Bruce Lee was born in San Francisco. His parents were of Chinese heritage from Hong Kong and Bruce was subsequently raised in Hong Kong. Bruce was philosophical in nature and was influenced by the spiritual religious doctrines of Buddhism and Taoism.

In contrast, Abbas Alizada was born in Afghanistan and through I do not know his religious views, it is likely that the was born into a Muslim family.

Knowledge that a soul can change nationality and religion from one lifetime to another can help create a more peaceful world, as most wars are based on differences in these cultural markers of identity.