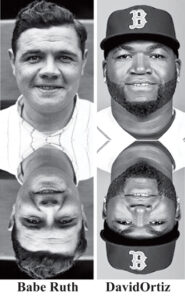 Years ago, David Ortiz was identified as the reincarnation of Babe Ruth. David Ortiz had been in the news in 2019 due to being shot and almost killed in his homeland of the Dominican Republic, in a case of mistaken identity. David’s nickname is “Big Papi,” similar to Ruth’s nickname, “The Bambino.”

Babe Ruth was born in 1895. He began his career with the Boston Red Sox and became American baseball’s ultimate home run hero. Ruth died in 1948.

David Ortiz was born in 1975 in the Dominican Republic. Like Ruth, he is famous for his ability to hit baseballs out of the ball park. David Ortiz is an All-Star baseball player, much as Ruth was. Interestingly, Ortiz played for the Boston Red Sox, just like Babe Ruth.

Physical Resemblance in Reincarnation Cases: There is a similarity in the facial features of Babe Ruth and David Ortiz.

Past Life Talent, Behavior and Abilities: The baseball home run ability of Babe Ruth has been replicated in the life of David Ortiz. Both Ruth and Ortiz played for the Boston Red Sox.

Change in Nationality and Race: Babe Ruth was a Caucasian born in Baltimore, Maryland, in the United States. David Ortiz, a Hispanic, was born in the Dominican Republic of the Caribbean Islands. Understanding that souls can be born in different nations, cultures, religions and ethnic backgrounds from one lifetime to another can help create a more peaceful world, as most wars are based on differences in these cultural markers of identity.