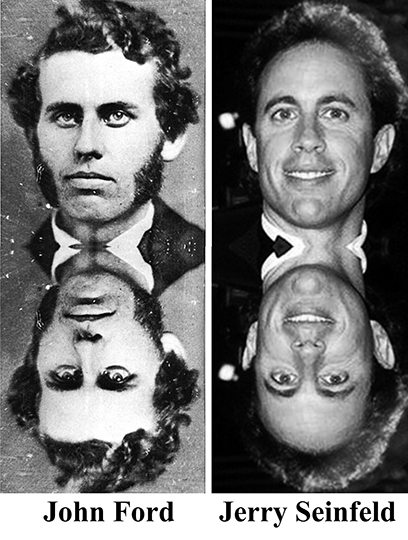 When Ishtar send the proposal that Jerry Seinfeld is the reincarnation of John Thompson Ford, I noted a physical resemblance, which would have been more pronounced if a photo of Jerry was available in the same stern pose that John Ford assumes. When I read about Ford, I was more impressed to learn that he wrote a play, a farce, entitled Richmond As It Is, which focused on humorous aspects of everyday life. This is termed observational comedy, which is exactly the type of humor that Jerry Seinfeld has used to established one of the most successful comedy careers of our era.

This reincarnation case demonstrates how a soul can build upon achievements from one lifetime to another. Ford had a gift for humor, but worked various jobs to make a living. In contemporary times, Jerry Seinfeld’s gift for observational comedy has bloomed. Another case is provided below that dramatically demonstrates how one unconsciously builds upon accomplishments from prior lifetimes:

A number of actors who knew John Wilkes Booth have reincarnated in contemporary times. One such actor is Tom Cruise. Please review:

A detailed account of this soul group is presented in my book: Born Again

Physical Resemblance:  The facial features of John Thompson Ford and Jerry Seinfeld are similar. One difference is that Ford has a serious pose in his photo, while Jerry Seinfeld is caught in a more light-hearted facial expression. If Jerry Seinfeld posed in a way similar to Ford, the resemblance would be more apparent.

Past Life Talent: Ford did observational comedy, focusing on silly aspects of everyday life, which is exactly the type of humor Jerry Seinfeld is known for.