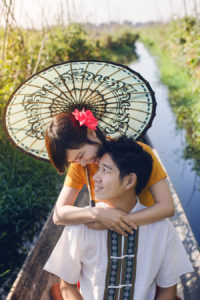 From: The Soul of a People, by Harold Fielding

Nyein and Gywin are Born and Die on the Same Day

Nyein and Gywin played together, grew up together and came to love one another. When they became adults, Nyein and Gywin married and worked as farmers.

Nyein and Gywin, knew a couple in the village of Oksitgon named Maung Kan and his wife.

Relationships Renewed through Reincarnation: Nyein and Gywin are Reborn as Twin Boys 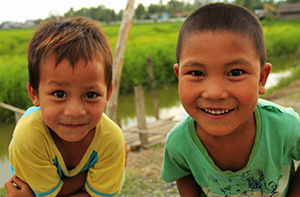 At the time, Britain was waging a war with Burma in an attempt to reestablish England as a colonial power ruling over Burma.  Britain won this war on November 28, 1885.

While still living in Oksitgon, in 1886, Maung Kan’s wife gave birth to twin boys. The couple named their sons Maung Gye and Maung Nge. For simplicity, we will refer to them as Gye and Nge.

Shortly after their twin sons were born, Maung Kan and his wife left Oksitgon and moved to the village of Kabyu in Burma, which is where their twin boys grew up.

Their parents recalled that these names matched the names of the couple that they had known in Oksitgon.

Gye and Nge Recognize their Past Life Home and Clothing

Considering the possibility that their twin boys were remembering past lives as the couple Nyein and Gywin, they took their sons from Kabyu to Oksitgon to see if their boys would recognize places from these hypothesized past incarnations.

When the young twins ran into a woman in Oksitgon named Ma Thet, Nge, who recalled being the past life wife, Gywin, spontaneously remembered borrowing money, specifically 2 rupees, from Ma Thet, that was never paid back.  Ma Thet confirmed that she did loan 2 rupees to Gywin that was never repaid.

Gye and Nge have Physiques Corresponding to their Past Lives

When the twin boys were 6 years of age, Harold Fielding, who documented this case in his book, The Soul of a People, met them. Fielding noticed that the physique of each twin matched who they were in their past lives. Gye, who remembered being the husband, Nyein, was larger than his twin.  In contrast, Nge was smaller, reflecting the build of the wife, Gywin.

Planning Lifetimes and Relationships Renewed through Reincarnation: The married couple, Nyein and Gywin, reincarnated as the twins Gye and Nge. Ian Stevenson, MD of the University of Virginia compiled 31 sets of twins who in childhood, spontaneously remembered their past lives. Stevenson found that in 100 percent of these cases, the twins had significant past life relationships. To learn more, please go to:

Change of Gender: Gywin was female, but reincarnated as Nge, a male.

Physical Resemblance in Reincarnation Cases: Though there was no documentation regarding facial features in these cases, it was noted that the physiques of Nyein and Gywin were reflected in builds of Gye and Nge.