Priyanka Chopra as the Reincarnation of French Film Vamp Musidora and Nick Jonas as Costar Fernand Herrmann: Planning Lifetimes to be Reunited through Reincarnation 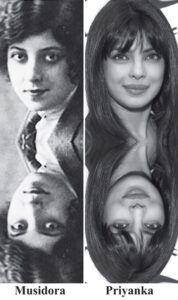 Article by: Walter Semkiw, MD with assistance from Karthik Ramaswamy

Clues to a Past Lifetime of Priyanka Chopra Jonas

Priyanka Chopra won the Miss World 2000 beauty pageant, which led to movie roles and fame, resulting in her becoming one of India’s most popular celebrities. She married Nick Jonas, a member of the Jonas Brothers singing group, which made Priyanka equally famous in the United States.

Since India’s primary religion, Hinduism, does accept reincarnation, it was natural to wonder who Priyanka, as well Nick, may have been in past lives.

I asked about Priyanka and Nick in a session with trance medium Kevin Ryerson, who channels Ahtun Re, a spirit being who has demonstrated the ability to make past life matches with a high degree of accuracy.

Ahtun Re told me that Priyanka was a French silent movie actress and  director at the turn of the century. At the time of this session with Kevin, I was busy with other reincarnation cases and did not take the time to research this French actress, who sounded obscure to me.

Priyanka as the Reincarnation of Musidora

Several months went by when I was contacted by Karthik Ramaswamy, an Indian American who wrote conveying his hypotheses regarding who Priyanka might have been in past lives.

I did not think his theories were valid, but after getting to know him a bit, I shared the information I already had regarding Priyanka as the French silent movie actress and director. I asked Karthik if he would like to research this French past life, which he agreed to do.

Not long thereafter, Karthik sent me information about Musidora, who fit the description given by Ahtun Re. In a subsequent session with Kevin, Priyanka’s past life as Musidora was confirmed.

Musidora’s birth name was Jeanne Roques and she was born in 1889 in Paris.  She started acting when she was 15 years old. In the early years of French cinema, she collaborated with the influential film director Louis Feuillade. This led to Jeanne, who had taken on the stage name, Musidora, to landing a lead role in the movie series Les Vampires.

Ahtun Re and the Akashic Records

By the way, when I asked Ahtun Re if Priyanka was Musidora, I said that Musidora had starred in Les Vampires. I then added: “I guess it’s a movie about vampires.”

After affirming that Priyanka was Musidora in a past lifetime, Ahtun Re said that Les Vampires was actually about a gang of criminals, not a movie about actual vampires. He then said the gang symbolically sucked the blood of society.

I was stunned that Ahtun Re knew this obscure detail and demanded: “How did you know that?”

Ahtun Re has done this repeatedly in my sessions with Kevin, which I have been having on roughly a monthly basis since 2001. Ahtun Re has an encyclopedic scope of knowledge that never ceases to amaze me.

Ahtun Re explained that when I ask about a person, he focuses on the subject and information about this person just comes to him. Ahtun Re has the ability to read what is called the Akashic Records or Universal Mind. It is a record of all events that is etched in the spirit realm. Ahtun Re accesses this record telepathically.

Nick Jonas as the Reincarnation of Fernand Herrmann 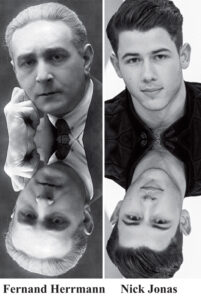 In the same session in which Ahtun Re confirmed that Priyanka was Musidora, I asked if Nick Jonas was incarnate during Musidora’s lifetime. Ahtun Re told me that Nick was one of the other actors in Les Vampires.

As before, I asked Karthik if he could try to find Nick. Karthik then watched a number of episodes of Les Vampires. Afterwards, he wrote to me and related that the most likely candidate for Nick Jonas was Fernand Herrmann, a reincarnation match that was subsequently affirmed by Ahtun Re.

Musidora was married to Dr. Clément Marot for 15 years before the union ended in divorce. I do not know if Musidora and Fernand Herrmann had any type of significant personal relationship during their professional careers, but they must at least have been friends.

Souls do plan lifetimes from the spirit world to be reunited with those they have known, worked with or loved in past lives. The strongest evidence of planning lifetimes comes from the Twin Study conducted by Ian Stevenson, MD, an academic psychiatrist at the University of Virginia. To learn more, please go to:

To review other cases involving entertainers, please go to:

Physical Resemblance in Reincarnation Cases: There are similarities in the facial features of Musidora | Priyanka and Fernand Herrmann | Nick Jonas.

I believe that physical appearance is determined by an energy template projected from the soul into the developing fetus and child, which results in facial architecture being similar from one lifetime to another, though genetic inheritance can modify appearance.

Past Life Passions, Talent and Abilities: Musidora and Fernard were actors, as are Priyanka and Nick.

Relationships Renewed through Reincarnation: As noted before, Musidora and Fernand have rendezvoused in the lives of Nick and Priyanka.

Change of Nationality: Musidora and Fernand were French, while Priyanka was born in India and Nick was born in the United States.

Understanding that one can change religion, nationality and ethnic affiliation from one incarnation to another can help make the world a more peaceful place, as most wars are based on differences in these cultural markers of identity . An important case in this regard is the:

Reincarnation Cases with Change in Religion and Nationality