From: Article in Reincarnation International, Volume 1, No. 2, by Roy Steman

The case of Titu Singh that appeared in the London-based magazine, Reincarnation International, is one of the more fascinating cases of double birthmarks. This story was first broadcast in 1990 on the BBC TV news program Forty Minutes. The case of Titu who named names and details of his own murder made for exciting TV drama, all true. Place your cursor on images to enlarge.

Titu Singh was two and a half years old when he began to tell his family of his other life in Agra, a city in northern India. His memories were quite specific: he said that he had been the owner of a radio, TV and video shop, his name was Suresh Verma, he had a wife named Uma and two children. He also said that he had been shot, then cremated, and his ashes had been thrown in the river.

His parents didn’t take him seriously at first, but his behavior puzzled them–he often behaved as if he wasn’t part of their family. “Titu is just an ordinary child, but sometimes he says and does things that only adults do,” said his father.

Titu Threatens to Run Away to his Past Life Home

Repeatedly, Titu would tell his parents that he was homesick and wanted to go back to Agra. Once, he became so insistent about leaving, that he rolled his clothes into a bundle and threatened to leave home. This behavior was also observed in the: Reincarnation Cases of Burmese Twins

Titu’s older brother decided to travel to Agra to check out his young brother’s claims. He found a TV, radio and video shop called Suresh Radio, which was run by a widow named Uma whose husband had been shot, just as Titu had described. The shop is pictured to the right. The murder occurred in August 1983. The brother approached Uma and explained how his little brother claimed to be her deceased husband. This information made Uma feel very odd.

She decided to visit the Singh family the next day and see what truth there was in this young child’s report. When the Verma family arrived unannounced, Titu was outside washing at the tap and spotted them first. He recognized them immediately and shouted to his parents that his “other family” had come.

They invited the visitors to sit on the veranda and Titu asked Uma to sit near him–an odd way for a five-year-old in India to relate to a grown woman. He asked about the children, and then stunned the widow by recounting the details of a family outing to a fair in a neighboring village where Suresh had bought her sweets, information that only she could have known. Titu later described burying gold in a hole in the house. 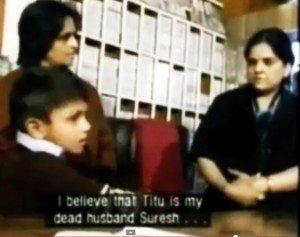 It was then arranged that Titu be taken to Agra. When he and his entourage arrived, it had been arranged for Suresh’s two children to be playing among many other neighborhood children as a test for Titu. Titu recognized them immediately, singling them out from their playmates.

Upon entering the Suresh Radio shop, Titu correctly identified changes made to the shop since Suresh’s death. In the adjacent image, Titu is in his past life radio store with his past life wife, Uma, who is at the far right with hands folded.

Both families played out the ongoing drama of Titu. Titu’s parents had mixed feelings about his relationship with his former family. His mother, who had five older children, didn’t mind him talking about his other parents and former family. She explained, “I feel as though we are all part of the same family. I am comforted by his childish loyalty, saying that although he has parents elsewhere we will always be his real parents. But Titu complains I wear old clothes. He says he used to buy Uma expensive saris.” Titu’s father said he was afraid that when Titu is older, he might break ties with them and go to live with his other family.

Suresh’s parents are certain that Titu is their dead son Suresh reincarnated. His father said, “Titu clings to us with affection. Once in the street he came across a former nanny. She thought Titu was one of Uma’s sons. Titu got annoyed at her saying, ‘Don’t you know who I am?’” The father of Suresh added, “We talk to each other like father and son. But I don’t encourage it too much because it upsets his real parents.”

Back to the murder: Titu accurately described how Suresh had been shot in the head at night while sitting in his car after arriving home from work. This was corroborated by Uma. The TV cameras showed the autopsy report of Suresh Verma, which confirmed that he had been shot in the head and died from a bullet wound to the right temple. The autopsy showed the exact size and location of the wound, and the exit wound on the opposite side of Suresh’s head.

Titu told more details of the murder to an Agra court and was able to “convince the authorities that he was the reincarnation of the murder victim.” The outcome of the case was not given in this account, but N. K. Chadha, a professor at Delhi University who researched the case, was quoted as saying, “Because of the police involvement, this is one of the very best documented cases of seeming reincarnation I have seen.”

If this reincarnation is accepted, it demonstrates the following features:

Physical Resemblance in Reincarnation Cases: The facial architecture of Suresh and Titu are similar.

Relationships Renewed through Reincarnation: Suresh reincarnated as Titu not far from his past life home, which allowed Suresh to be reunited with his past life family.