The Musician Grimes, Mother of Thomas Edison’s | Elon Musk’s Child, as the Reincarnation of Mina Edison: Children Named Tech Symbols such as X Æ A-12 in Two Lifetimes

Elon Musk as the Reincarnation of Thomas Edison and Claire Boucher, known as Grimes, as Edison’s Wife Mina

On May 4, 2020, Elon Musk and his partner, Grimes, had a baby boy who they named X Æ A-12. One interpretation of this name is that X is an unknown variable in mathematics, Æ represents artificial intelligence and is pronounced “Ash,” and A-12 refers to the couple’s favorite aircraft, Lockheed Martin’s Archangel 12. In sum, the name is pronounced X Ash Archangel 12.

Grimes seems to have affection for mathematical symbols as since 2018, she has gone by the name “c,” referring to the symbol for the speed of light.

Previously, I posted an article in which Elon Musk is identified as the reincarnation of Thomas Edison.

The strongest evidence for planning of lifetimes is the Twin Study published by Ian Stevenson, MD of the University of Virginia, who compiled over 1500 validated childhood past life memory cases. To learn more, please go to:

Nobel Laureate Kary Mullis, PCR Creator, and his Wife Nancy Support their Past Lives as Benjamin and Julia Rush

Married couples often reincarnate together to become spouces once again. One such case involves Nobel Laurate Kary Mullis and his wife Nancy Mullis. Kary invented Polymerase Chain Reaction (PCR) which is the basis of DNA analysis and fingerprinting. It has been stated that biologic science can be divided into two eras, one before PCR and the era after PCR. 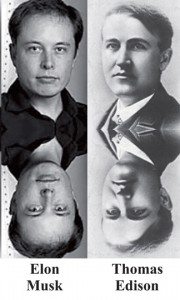 Kary and Nancy Mullis both agreed to be reincarnation cases in my first book, Return of the Revolutionaries, in which they are identified as Benjamin and Julia Rush in past lives. Benjamin Rush was a friend to both John Adams and Thomas Jefferson. Rush called the duo the “North and South Poles of the American Revolution.”

Grimes as the Reincarnation of Mina Edison

Reflecting on the Rush | Mullis cases and others that are similar, it was natural to wonder if Elon Musk and Grimes were together in the era of Thomas Edison. In reading about Edison, I found a likely candidate in Edison’s second wife, Mina (pronounced my-na), for a past life of Grimes.

In a session with Kevin Ryerson, Ahtun Re, the spirit being who has demonstrated the ability to make past life matches with a high degree of accuracy, affirmed that Grimes is the reincarnation of Mina Edison.

Mina was born on July 6, 1865, the seventh child of inventor Lewis Miller and his wife, Mary. Mina married Thomas Edison when she was 20 years old, about half the age of Edison at the time of their union. As Thomas was often in his lab, Mina took charge of the household and gave herself the title “Home Executive.” Mina became a leader in the community in which they lived.

During the Great Depression, Mina herself conducted a study on the effects of unemployment on local medical facilities. After her husband’s death in 1931, Mina founded the Thomas Alva Edison Foundation. Mina died in 1947.

Claire Elise Boucher was born in Vancouver, Canada on March 17, 1988, 41 years after Mina had died. For college, Clair attended McGill University in Montreal and one of her majors was neuroscience, which seems to reflect Mina’s interest in health care.

Clair began recording music under the name Grimes in 2007. Starting in 2018, she adoped the nickname “c,” the symbol for the speed of light. In that year, she also started a relationship with Elon Musk, which resulted in the creation of their son, X Æ A-12.

In an amusing correlate, Thomas Edison gave two of his sons from a prior marriage the nick names “Dot” and “Dash,” in reference to Morse Code. Edison taught Mina Morse Code so that they could communicate in secret around her family and he reportedly proposed marriage to her in Morse Code, which I think is quite romantic. Morse code is a precursor to binary language used in computer programming, where 1 and 0 are used instead of dot and dash.

As such, technologic names and nicknames are observed in the lives of Thomas Edison | Elon Musk and Mina Edison | Grimes.

To review other related cases, please go to:

Physical Resemblance in Reincarnation Cases: There are similarities in the facial features of Thomas Edison | Elon Musk and Mina Edison | Claire Bouchon (Grimes).

Relationships Renewed through Reincarnation: Thomas and Mina have reunited in the persons of Elon and Claire.

Past Life Passions, Talent and Abilities: Thomas Edison’s genius is expressed in the life of Elon Musk. In the era of Edison, women were allowed limited roles in society. In contemporary times, the soul of Mina | Claire is expressing her talent in music.

Change in Nationality: Thomas and Mina Edison were born in the United States, while Elon Musk was born in South Africa and Grimes was born in Canada. Understanding that culteral markers of identity such as nationality, religion and ethnic affiliation can change from one lifetime can help create a more peaceful world. An important case in this regard is the: