Mormon Reincarnation Case of Almon Babbitt | Mitt Romney and Joel Osteen as the Reincarnation of Joseph Smith, Founder of the Mormon Religion 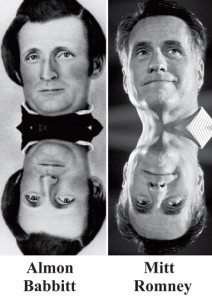 In a session with Kevin Ryerson, I asked for a past lifetime for Mitt Romney. Athun Re, the spirit guide that Kevin channels who has demonstrated the ability to make accurate reincarnation matches, told me that Romney was a Mormon pioneer in the Utah Territory who worked to establish statehood for Utah.

I did some research into Mormon history and found that Almon Babbitt was the likely candidate, Ahtun Re later confirmed that Mitt Romney was Babbitt in a past lifetime. Babbitt was the first Treasurer of the Utah Territory, an office that reflects Romney’s skills in finance. In 1849, he was selected to travel to and work in Washington, DC, to petition for statehood.

By incarnating into a Mormon family, living in Utah for a period of time and becoming the first Mormon to seek the US Presidency, Mitt Romney is replicating the mission of Almon Babbitt of being a Mormon national political pioneer.

Romney’s wife Ann was also his wife in the Babbitt lifetime, whose maiden name was Julia Ann Johnson.

A related case, given the 2012 US Presidential Election, is the reincarnation case of Lyman Trumbull | Barack Obama. 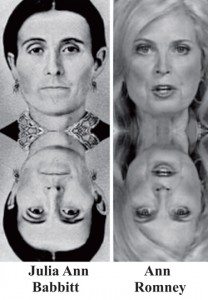 Past Life Talent: Babbitt was the first treasurer of the Utah Territory and Mitt Romney is known for his success in finance. Babbitt was a national Mormon political figure, as is Romney.

Relationships Renewed through Reincarnation: The married couple of Almon and Julia Ann Babbitt has been reunited in the persomas of Mitt and Ann Romney.