Serbian Versions of And the Wolves Howled by Barbro Karlen & Born Again, by Walter Semkiw, MD

Ljiljana Pjevac Pejovic, pictured to the right, was a child prodigy who excelled in academics. She trained as an attorney and was one of the first women in Serbia to establish a successful business following the fall of the Soviet Union.

Having natural psychic talents, Ljiljana has had an avid interest in reincarnation. She has supported reincarnation research by publishing books on the subject in Serbia.

In particular, Ljiljana was impressed by the reincarnation case of Anne Frank | Barbro Karlen, which had been published in Born Again, written by Walter Semkiw, MD.

With the assistance of her son, Zdrako Pjevac, Ljiljana published Barbro Karlen’s book, And the Wolves Howled, in Serbia. In addition, she also published a version of Born Again, which incorporates Origin of the Soul. Ljiljana graciously sponsored Barbro’s and Walter’s participation in the Belgrade International Book Fair in 2008, where Ljiljana, Zak, Barbro and Walter became good friends. 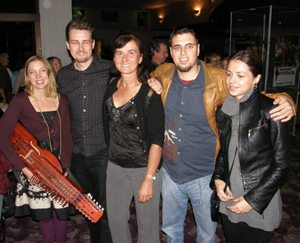 Zdrako Pjevac is also an attorney, who trained in England and who now works for Paragraf Lex. Zdrako has also become a strong supporter of reincarnation research. As Ljiljana does not speak English, Zdrako has become a liaison for ReincarnationResearch.com in Serbia.

In the photo provided to the right, Barbro Karlen is in the center. To the right of Barbro is Zdrako Pjevac and next to him is Bojanna Miljanovic, who is an Serbian attorney trained in International Law. To the left of Barbro is her son, Erik, and Erik’s wife Anna, who are accomplished Swedish folk music instrumentalists.