LeBron James as the Reincarnation of James Naismith, Athlete and Inventor of Basketball: Change of Race and Past Life Talent, with the Soul’s Ability to Control the Process of Conception 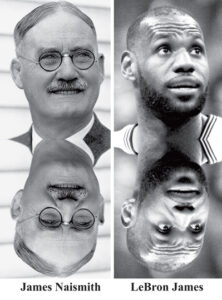 James Naismith was born on November 6, 1861 on a farm in Ontario, Canada, where he was raised. Orphaned as a child, James lived with his aunt and uncle.

In 1883, at the age of 21, he went to Montreal Canada where he enrolled into McGill University. There, he was a star athlete, winning metals in gymnastics and playing rugby, soccer, lacrosse and Canadian football (center). He was 5 feet 10.5 inches tall and weighed 178 pounds.

Naismith earned a BA in Physical Education and subsequently taught the subject at McGill, soon becoming its first athletic director.

Naismith in Massachusetts and the Creation of Basketball

James then moved to the United States, settling in Springfield, Massachusetts, where he became a physical education teacher at the YMCA International Training School.

In the cold New England winter, his athletes became ill-tempered being confined to limited indoor activities. To quell the unrest, the head of the program ordered Naismith to create a game to occupy the program’s athletes, which would not take up much room, could help athletes keep in shape, was fair for all players and was not too rough, to minimize injury. Naismith was given two weeks to manufacture this game.

To reduce physical contact between the players and thus decrease chance of injury, Naismith envisioned installing a hoop high over the heads of the players. Points were awarded each time a player lobbed a ball into the hoop. He chose to use a soccer ball, which is relatively soft, to also lower the chance of injury. Players could pass or dribble to move the ball around. Naismith summed up the game into 13 rules.

The first game of “Basket Ball” was played in December 1891. Naismith lived to witness his invention become an Olympic game in 1936, as well as the birth of the NCAA Tournament in 1939. He died in November of 1939.

LeBron James was born in Akron, Ohio. His father had a criminal history and was absent from LeBron’s life. His mother, Gloria, struggled to find regular work. To give her son a greater opportunity to succeed in life, she allowed LeBron to live with the family of Frank Walker, a local youth football coach. Walker introduced LeBron to basketball when he was 9 years old.

LeBron James has gone on to become one of the greatest basketball players of all time, with only Michael Jordan as a peer.

There is strong evidence that souls plan lifetimes and chose the family they will reincarnate into. This is clearly shown in the Twin Study published by Ian Stevenson, MD of the University of Virginia. Stevenson, over a period of 40 years, compiled over 1500 objectively validated childhood past life memory cases.

Out of this population, he identified 31 sets of twins (62 people) who in childhood remembered their past lives with enough detail that their previous personalities could be identified, and their memories validated.

In 100 percent of these cases, the twins had significant past life relationships, including being siblings, friends and even spouses. One set of twins were also twins in their past lives. To learn more, please go to:

The Power of Souls: Twins are Murdered and then Reincarnate as Twins Again-Past Life Cases of the Tripathi Twins

For fraternal twins to reincarnate as twins again, the soul of each twin must be able to direct the place and family where conception will occur. For fraternal twins, two separate fertilized eggs (two eggs that have been penetrated by a sperm cell) are inhabited by two different souls. Appearance of the twins will be different as they derived from two different eggs that are inhabited by two different souls. Each soul projects an energy template into the developing fetus, which helps shape physical appearance. For a discussion on reincarnation and physical appearance, please go to:

The Basis of Physical Appearance in Reincarnation Cases

For non-twin cases, the process is the same except that there is only one soul involved that assumes control of one entire egg.

To review other cases where loved ones are reunited through reincarnation, please go to:

Choosing to Reincarnate into the Black Race

90 percent of the National Basketball Association’s athletes are Black and 70 percent of the athletes in National Football Association are Black. Studies have shown that Africans in the areas of Kenya and Ethiopia genetically have larger lung capacity than the lung capacity of Caucasians or other races. This is why so many marathon winners come from these regions of Africa.

Differences in genetic capabilities of races is likely known in the spirit world. If you invented the game of basketball and wanted to reincarnate to become a star of the sport, which race would you reincarnate into?

Understanding that Souls Can Change Race, Religion and Nationality can Help Create a More Peaceful World

Most wars and conflicts are based on differences in the cultural markers of identity listed above. Change in these cultural markers is demonstrated in many of Ian Stevenson’s reincarnation case studies. In addition, a dramatic case that demonstrates change in religion and nationality involves the reincarnation Anne Frank. To learn more about this case and other similar cases, please go to:

Past Life Cases with Change of Religion, Race, Nationality and Ethnic Affiliation

To review other athlete cases, please go to:

In general, facial bone structure stays similar from one lifetime to another, whereas body size can vary depending on genetic and nutritional factors.

Past Life Passions, Talent and Abilities: Naismith was a star college athlete and the creator of basketball, while LeBron James is one of the sport’s brightest lights.

Change in Race and Nationality: Naismith was a Canadian Caucasian. In contrast, LeBron James is an African-American born in the United States.