An Essay by: Jan Phillips

I woke up last night to the sound of laughing and realized I’d fallen asleep with the TV on. It was 3 AM and I knew it was Jon Stewart on the television, but I had to fumble around for my glasses to see who his guest was.

Unbelievable! It was Jesus, in his robe and all. His nose was bigger than I thought, his skin a lot darker, but his eyes were more piercing than I’d ever imagined. It was like light came out instead of going into them.

Jon was making some joke about both of them being Jews. Jesus, after laughing harder than I thought he would, said quite seriously to Jon:

“Yeah, that’s one of the weirdest things, isn’t it? How could they forget that the founder of Christianity was himself a Jew?”

Jon was all over him with questions from the daily news. What was his take on the Ground Zero fiasco in which there were protests about building a Mosque in near proximity of the fallen 911 Twin Towers in New York ? Jesus said he’d seen some newscasts on the story and couldn’t believe the drama and fear it was bringing up.

“They want to build a public building for prayer, education and community gathering. That’s a good thing. A better thing perhaps, would be the construction of an interfaith building. There’s room for everyone, and it’s these distinctions between religions that’s causing all the problems in the first place.” 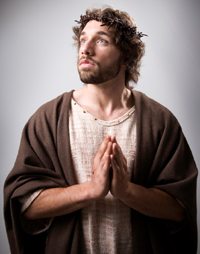 “Yes, a multi-tasking mosque, with a synagogue, chapel and meditation hall in it. A building where people of different faiths come together to make a better world together. That’s the point of religion right? It’s not about doctrine. It’s a plan for action, an opportunity to be a bigger force for good. Religion is just the map. Faith is the real adventure.”

“I don’t know,” said Stewart, making one of those funny mouth movements he does after hearing a strange idea.

Jesus pipes in, “What could be better in that spot than a building that represents, by its very structure, a coming together, a new vision that goes beyond religious borders? It’s like taking a good idea and making it great. The real prophets of the day know this. Where are their voices? Why aren’t you interviewing them?”

“Hmm, I thought I was,” says Stewart, tapping his pencil on the desk.

“You know why you have border issues here? Because you believe the borders are real, like they MEAN something. Muslin against Christian, Mexican against American, Republican against Democrat-all those borders are made up. You put up walls to defend your ideas-and not even your OWN, but ideas passed down to you from someone else-and then you make other people look like demons. You don’t get it how connected you are. You’re like five fingers on a hand who think they’re separate and make up reasons why not to get along.”

Jon sat there with his mouth open.

“You’re like children playing war games. You spend all your time, all your energy attacking the “other side” instead of realizing you need to bridge the two sides in order to get across to a higher level of thinking. Even news shows are at war. Look at how you make fun of FOX. What light does that add to the world? All the time you could be giving to real visionaries, all the ways you could be role-modeling good behavior, showing the audience how it really WORKS to bring great and opposing minds together, and you sit there poking fun at another station. That’s really enlightened, isn’t it?”

This was the first time I’d ever seen Jon Stewart speechless. He looked like an embarrassed 6th grader. No pencil tapping now. More like a puppy with his tail between his legs.

“What in the world are you people doing? The ones who call themselves ‘religious’ are often the most immature, the most judgmental and intolerant. What is THAT about? That’s exactly the opposite of what every religion teaches. And I mean EVERY religion,” Jesus said, as he looked away from Stewart and spoke right to the camera.

“All the religions say two basic things,” he said, holding up his fingers in a peace sign.”

“First, there is no distance between you and this one you call God. God is the creative force behind all things. It’s invisible, but you are the manifestation of it. I’m telling you, the Sistine Chapel should have been a mirror.”

The audience laughs, but Stewart stares into those deep eyes of the Nazarene.

He goes on, “You are the eyes, the hands, the feet of that creative force. That energy is in you. It’s called your breath.”

He holds up his index finger and taps on it a few times. “That’s the first thing. Don’t think there’s some man out there pulling strings. Grow up. This civilization-if you can call it that-is YOUR creation. This Earth, it is not a bunch of resources to be exploited. It is not to be owned. It is your mother, the womb that you sprang from. You are its consciousness, its neural cells. The whole Earth is the organism that you belong to. You did not come down to Earth, you came up from Earth, as I did. Its well-being is in your hands. Can you be proud of what you’re doing? Are you going to be the ones who kill it off, after all that talk about pro-life?”

Jesus was getting a little worked up, like that day he stormed through the temple turning over the merchants’ tables. Jon cut to a commercial.

“And we’ll be right back to hear the 2nd basic thing from our guest tonight, ladies and gentlemen, the Jewish prophet Jesus of Nazareth. Stay tuned.”

They were laughing about something when they returned from the commercial, Jesus stretched out in his chair with his long lanky legs covered by his tunic, his sandaled feet hidden under the desk.

“OK,” Jon says, “You were saying there were two things. Let me see if I got this right. There’s no bearded guy up there on a cloud. That God we talk about and fight over is the creative force inside us and around us? It’s invisible and we’re like….(a long pause) its shadow?”

“Not exactly,” says Jesus. “We’re like the physical form of the same energy. The ice-cube version of water or steam. Same elements, different form. The sea and the iceberg. You’re all icebergs in the Sea of God,” he said, half-laughing at his own quaint metaphor.

“But the problem is you don’t realize that underneath it all, you’re all connected. There’s just one big iceberg with a lot of tips. The truth is, you’re Creation continuing the co-creation of Itself.”

Jesus holds up his two fingers again, tapping the tip of his middle finger. The camera zoomed in so closely on him I could see a scar on his forehead. “It’s not so much what you need to know-that’s part of the problem, all these people’s’ belief systems. That’s what gets you in trouble. No one has to believe in me to get to heaven. It’s not what you believe in but how you act that matters. If anyone learned anything from reading that Bible they should have picked up that one. There are 3000 references to helping the poor in there. But let me get back…”

“The second thing is this: Forget everything you ever learned in any holy book and just treat everyone like a brother and a sister. I mean that literally. If it were your brother coming across the border…your sister with cancer and no health care….your child unable to get an education….your mother with no food in her house. And even further, your brother who was gay or hated gays, your sister who was a corrupt politician, your brother who bombed an abortion clinic, your sister who got an abortion. What does it look like to love unconditionally? To bridge differences, to come together over what we can agree on? Can you get through one day without thinking you’re better or less than another? That’s the thing to strive for. That is living faithfully.”

“But…but…” says Stewart. “What about the Tea Party, the terrorists, what about Fox News and hate crimes?”

“Not focus on who’s wrong? How could I do my show?”

“Exactly. Remember what Gandhi said? Be the change you want to see in the world?”

“Sure. I have that quotation on my refrigerator.”

“Well, it’s time to take it further. You’re evolving as a people. You’ve come through the Dark Ages, the Middle Ages, the Renaissance, the wrongly named Period of Enlightenment.

You’re now in the Information Age. You are growing your consciousness.

In the physical world, you have Olympic marathon athletes who run 10 miles or more a day. They spend every waking hour in training, eating the right foods, researching the right clothing and equipment, working out, following a discipline.

And in the metaphysical world, the spiritual world, you have people doing the same-they are your mystics and prophets-engaging in spiritual practice, accelerating their wisdom, expanding their consciousness, transcending judgment and radiating love into the world. You might be in that category.”

Stewart does one of his choking, ahem things, putting his hand over his mouth. “Out of the question,” he says frankly. “I thrive on judgment.”

“Good to know yourself. You’re all evolving at different rates. In the fall, when you look at a maple tree, you see leaves that are green, yellow, orange and red. They don’t all change at the same time. And that’s what makes life exciting. You all know different things. That’s why you need each other.”

Stewart nods his head in agreement, tapping his pencil on the table again.

“But back to Gandhi. I agree with what he said, but I’ll say it a different way, just to shake things up a bit, which I love to do. By the way, it would make a great bumper sticker: Be the God you want to see in the world.”

“You know as well as I do, every good idea starts out as a blasphemy.”

“OK, great, we’re out of time,” says Stewart, as the camera swings over for a shot of the audience. They’re all standing, some crying and laughing at the same time, the most incredible look of collective awe I’ve ever seen. And Jesus walks over and starts shaking hands with them. What a night!”

This essay was written by Jan Phillips: www.janphillips.com

Key excerpt: “You’re like five fingers on a hand who think they’re separate and make up reasons why not to get along.”