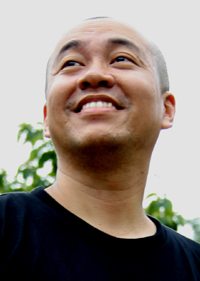 Handaka was born in Temanggung, Indonesia. He became a pharmacist, graduating from Gadjah Mada University, Yogyakarta. After working for multinational companies, he turned to entrepreneurship and started a company specializing in pharmaceutical exports. In this capacity, Handaka lived in Myanmar and Thailand, before returning to his native Indonesia.

In 2002, he established the Ehipassiko Foundation, a non-profit organization focused on the teachings of Buddhism and the publication of books related to Buddhism. The creed of the foundation is a “Lifetime Commitment to Dharma,” which can be understood as a commitment to a lifetime of service.

In the Indonesian version of Born Again, Handaka himself is featured as a reincarnation case. In his proposed past lifetime as Henry Opukahaiia, Handaka was also passionate editor and translator of spiritual scriptures, though in this past incarnation, he translated Christian scriptures.

Handaka is a very entertaining and popular public speaker in Indonesia, conducting many presentations, trainings and retreats on Buddhism throughout Indonesia. He is a beautiful soul who spreads happiness wherever he goes.

In 2008, Handaka organized a tour for Brenda ie-MacRae and Walter Semkiw, MD to four cities in Indonesia: Denpasar on Bali, Medan on Sumatra, Palembang on Sumatra and Jakarta on Java. We give heartfelt thanks to all those wonderful and loving people who hosted and participated in our presentations.