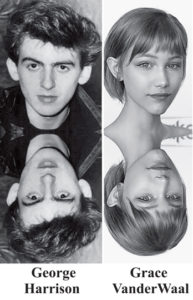 Proposed by: Mike W. from Florida

Affirmed by: Spirit Guide Ahtun Re in a Ryerson | Semkiw Reincarnation Research Session

Grace VanderWaal became a sensation in the United States when she won the eleventh season of America’s Got Talent at the age of 12 in 2016. A unique part of her musical act is that she accompanies her singing by playing the ukulele.

In 2018, a supporter of ReincarnationResearch.com, who identifies himself as Mike W. from Florida, wrote to me forwarding the hypothesis that Grace may be the reincarnation of George Harrison, the lead guitarist of the legendary band, The Beatles.

Grace VanderWaal as the Reincarnation of George Harrison

Mike pointed out that Grace, as a songwriter, is very advanced for her age. He also pointed out something that I didn’t know, that George Harrison loved the ukulele and carried a “uke” wherever he went. A hand written note that Harrison wrote about his beloved instrument is provided below and link to a video of Harrison playing the ukulele is provided a the bottom of this article. Click on images to enlarge them.

Mike also pointed out that George Harrison once created the soundtrack for a movie entitled Wonderwall and as George had a great sense of humor, the soul of Harrison may have decided to incarnate into a family with the name VanderWaal. There is ample evidence that souls plan lifetimes. To review this evidence, please go to:

Reincarnation and the Planning of Incarnations

There is also evidence that individuals can have the same or similar facial features from one lifetime to another. I did observe that Grace and George Harrison do have consistent facial architecture. 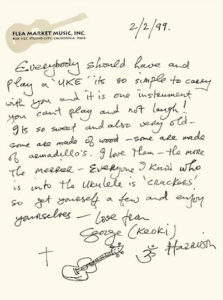 In a session that I had with trace medium Kevin Ryerson, the spirit guide Ahtun Re, who has demonstrated the ability to make past life matches with a high degree of accuracy, affirmed that Grace VanderWaal is the reincarnation of George Harrison. Harrison, by the way, was very interested in the culture India, in which reincarnation is a fundamental belief. As such, it is likely that Harrison believed in reincarnation.

Physical Resemblance in Reincarnation Cases: The facial features, or facial architecture, of Grace and George Harrison are similar.

Past Life Talent-Child Prodigies: George Harrison’s musical genius shines forth in the persona of Grace VanderWaal.