Advances in Reincarnation Research: A Tribute to Ian Stevenson

The most compelling reincarnation cases are those in which young children spontaneously remember past lives that can be factually verified. Ian Stevenson, MD, of the University of Virginia, compiled over 1200 of these objectively validated cases, which in aggregate provide proof of reincarnation. His academic research is presented on the Reincarnation Research web site as children’s past life stories for ease of understanding.

Typically, in these cases, the child starts telling his or her parents about a past incarnation as soon as they learn to speak. Past life memories generally persist until the age of seven, at which time memories tend to fade.

Theses memories can include their name in the past lifetime, as well as the names of their parents and family members from the prior incarnation.  The child may also recall the name of the city or town that they lived in.

Based on the child’s past life memories, the past life family will often accept the child as the reincarnation of their deceased loved one.  Two key reincarnation cases of this kind, researched by Ian Stevenson, MD, which also demonstrate physical resemblance from one lifetime to another, are provided below:

As noted, these two cases were researched by the late Ian Stevenson, MD, a pioneer of reincarnation research, who was a Professor of Psychiatry at the University of Virginia, in the Division of Perceptual Studies.  Dr. Stevenson chose to primarily research cases involving children with spontaneous memories as he felt these cases were the most likely to be valid.

Another compelling reincarnation case involving past life memories in childhood is that of: Anne Frank | Barbro Karlen

Past Life Memories in Adulthood

Memories accessed in adulthood can be confounded by the adult reading historical information about the proposed past lifetime or era, which could taint the case.  Dr. Stevenson did not trust information gained through past life regressions, as he felt subjects could fabricate or make up memories.

Though this is true, the case of Carroll Beckwith | Robert Snow, which was derived through a past life regression, is a convincing reincarnation case. The xenoglossy cases of Gretchen Gottlieb | Dolores Jay and Jensen Jacoby | T.E., researched by Ian Stevenson, MD, also emerged through hypnosis or past life regression. 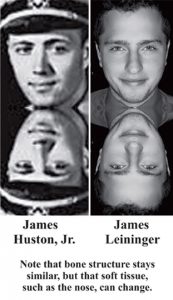 Researchers at the University of Virginia, such as Jim Tucker, MD, continue to focus primarily on children with spontaneous past life memories. These reincarnation cases in aggregate provide proof of reincarnation and indeed, Dr. Jim Tucker has stated on US national television that sufficient evidence now exists to conclude that reincarnation exists.  He did so when appearing in support of the James Huston, Jr. | James Leininger reincarnation case after it was aired on ABC Primetime.

Ideally, researchers should be involved in a case before the child is introduced to the past life family, so that the child’s reactions and identifications of past life family members can be witnessed objectively.

There also are cases in which children have partial memories, where the child does not provide enough information for the parents to identify the past life family.  Additional memories or information may be accessed later in life, which can allow the individual to identify their past incarnation.  Examples of cases of this sort are provided below:

In sum, cases based on spontaneous past life memories in childhood, in which the child’s memories can be validated objectively, are the most compelling of all reincarnation cases.