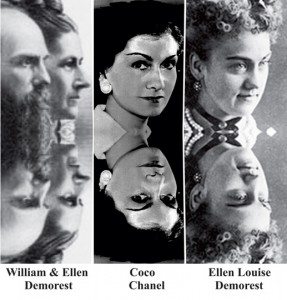 The Chanel company produced a short film entitled Reincarnation in which past life personalities have the same facial features as their contemporary counterparts. Similarity in facial features is indeed supported by independently researched reincarnation cases, including those published by Ian Stevenson, MD at the University of Virginia.

Ahtun Re, the spirit guide channeled through Kevin who has demonstrated the ability to make past life matches with a high degree of accuracy, told me that in a past life, Coco Chanel lived in New York and together with her husband, who had French ancestry, created a clothing company that brought the fashions of Paris to American women. When I asked what the name of this couple was, Ahtun Re said that he thought the name was “Demoreax.”

Ahtun Re was very close. With a little investigation, I found that a couple named Demorest had indeed created a clothing company in New York City. Ellen Louise Demorest invented a method to create tissue-paper dress patterns in multiple sizes, which allowed women of modest means to sew dresses that replicated fashions from Paris. Prior to that, Ms. Demorest was a hat maker. With her husband, William Jennings Demorest, the couple founded a very successful fashion house.

Physical Resemblance in Reincarnation Cases: There is a similarity in the facial features of Ellen Louise Demorest and Coco Chanel, particularly in the eyes and eyebrows. Resemblance in the eyes and eyebrows in past life cases is usually the easiest to appreciate, as this part of the face is least affected by variations in weight and facial adipose tissue or facial fat.

Past Life Talent: Ellen Louis Demorest made Parisian fashions available and affordable for American women. Coco Chanel helped free women of the 19th century from corsets and she invented casual wear for women. Ellen Demorest and her husband created one of the most succesful fashion houses of their era, as did Coco Chanel in her era.

Change of Nationality: Ellen Demorest was born in New York, while Coco Chanel was French.